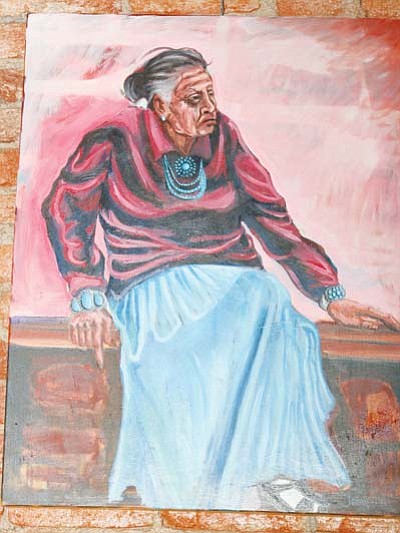 <i>Lisa Viotti/NHO</i><br> A sample of one of Jeremy Singer’s paintings. Singer frequently uses images of his Navajo family for his paintings, but dislikes being labeled as a “Native artist.”

"I chose to paint my point of view," he said. "I chose images of my family who happen to be Navajo. I don't want to be labeled a Native artist. It's a struggle to be a Native artist because we get lumped in that category and it's hard to work our way out of that label."

Singer, who uses oils and acrylics, tries to work humor into his paintings. He also adds in his experiences and his culture in either an abstract or representational manner.

He feels his painting career is just getting started as he attempts to control his pigments and palettes. His color selections are based on his home area of Gray Mountain and Cameron as he uses browns, reds, oranges and greens. He also uses purples, blues and turquoises that his grandma wore in her clothing or jewelry.

Singer said he communicates through his art.

"People get to see what I am thinking and how I present myself. I am not a talker. I nod yes and no. I text more on my phone then I call people," he said.

Singer became interested in art when he was attending Coconino High School, but picked up more art lessons at Coconino Community College, Northern Arizona University and the University of Arizona.

"I like to mess around with Adobe illustrator, pen and ink drawings that are influenced by Pushead and Rob Zombie," he said.

Singer also learned from his older brother who would use comic books and a sketch pad. He enjoys the process of painting. He doesn't want to rush his paintings as he works in his studio with the music going. If an idea hits him he likes to paint it immediately.

"I told my wife that if I ever went to Europe to the Louvre, The National Gallery in London or any prestigious gallery that my emotions would be overwhelmed," he said. "To see the art and the process of painting that went into each canvas, wow."

Singer feels he can improve by studying the process so he can add and subtract ideas. He enjoys other artists' ideas as they can spark a creative nerve in him. He likes working with youth. He currently works with a nephew teaching him how to paint.

"I wish our schools had more art and music. That made school fun when I was young," he said.

While Singer has won some awards that is not why he paints.

"I enjoy people's reaction to my art," he said.

He finds inspiration for his painting from his family and his homes in Flagstaff, Cameron and Gray Mountain. Family photos and art history books also give him ideas for his paintings.

Singer's paintings are often on display in galleries in downtown Flagstaff. He enters the big art shows such as Heard Museum and Santa Fe Indian Market. His work can be found at jeremysinger.com and on Facebook and Twitter.