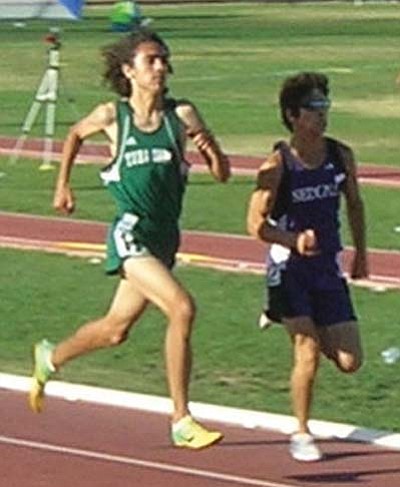 The meet opened May 14 with the Warriors' cementing their claim to a 3A Conference 4x800m relay dynasty by winning their fourth title in five years. One year ago, after the Warriors won the 4x800m state title convincingly with one of the fastest 3A times ever, and lost no one to graduation, the team set their sights on another title and a goal of being the first 3A team to break eight minutes in the event. But a season ending ankle injury to senior Herschel Lester, and near season-ending hip injury to sophomore Mathew Murray dropped Tuba City's relay squad from overwhelming favorites to underdogs in the event. All talk of records was over, and the 2010 title was in doubt.

Late in the season, the Warriors tapped their top 100m and 200m sprinter, Joel Thomas, to replace the injured Lester, and put Murray's training on hold for the final three weeks of the season hoping the rest would get him healthy enough to race. In the end, the hobbled Murray led off with a gutsy first leg. Thomas proved that he can run any distance well, and the stars Orman and Yazzie took care of the rest. Tuba City won in 8:14.64 with top-seeded Sedona second in 8:21.82. No other team broke 8:30.

Later on Friday night Orman and Yazzie lined up for the men's 3,200m run. Yazzie and Orman finished first and second in 2009. This year, Orman had become the dominant 3A athlete in the longest event, and victory seemed assured. In the last year Orman has broken the 3A state record three times, slashing 16 seconds from a record that had stood since 1987. Most expected Orman to win, but with two more races to run on Saturday, and having just run a 1:57.2 800m split in the 4x800, his coach was concerned that he might push the pace too hard.

The bigger question was Yazzie who had begun to look and sound ill midweek, and looked weakened by his race earlier in the day. Orman immediately assumed the lead from the start, and began running a pace that was modest only for him. At the halfway point he saw that the meet record was in reach, and he picked up the pace. Despite fist-pumping down the final homestretch, Orman ran the second half in 4:33 to win convincingly, and set a new 3A State Meet record of 9:18.91.

The 3,200m race did not go as easily for Yazzie. Soon after the starting gun, Yazzie was hit by a wave of nausea. One lap into the race he was 15th in the 18-man field. After two weak laps, Yazzie regained composure and began moving up quickly. In one 300m stretch he moved up from 15th to second place. But more than a mile remained, and the large chase pack contained 3A's top distance runners including Chinle's star sophomore Jonathan Yazzie.

Soon it became a two-Yazzie race for second - Tuba City's Ryan vs. Chinle's Jonathan. The pair battled back-and-forth for the final five laps of the race with both building leads of at least 10m over the other at different points in the race. With one lap to go Chinle's Jonathan Yazzie held a 5m lead, before Tuba City's Ryan Yazzie unleashed his patented kick to prevail 9:37.08 to 9:42.59.

For the second year in a row, Tuba City picked up 18 points in the 3,200m by finishing first and second.

The most talked about race of the meet was the men's 1,600m run (the metric mile) held on Saturday.

The Warriors' Ryan Yazzie was the defending champion, and 3A Conference record-holder with a time of 4:16.71 set last year. When the team awoke Saturday morning, however, Yazzie looked and sounded terrible. Whether Yazzie had been ill or not, two other athletes had run spectacular times in the event earlier in the season - Tuba City's two-mile specialist Billy Orman and Sedona's half-mile specialist Jesus Rivera. At the mile distance it was strength versus speed meeting in the middle.

As expected, Rivera was happy to let Orman set the pace, and save his speed for a blazing finish. Orman led for nearly three laps, but surprisingly he did not push the pace attempting to sap the speed in the kicker's legs.

With 500m to go, Rivera burst into the lead and built a 5m lead over Orman. Rivera's 50-second 400m speed led many to think the race was over, but with 250m to go Orman surged and began to close the gap. As the pair rounded the final turn Orman was just off Rivera's shoulder with both in full flight. The pair battled the remaining 100m, and lunged across the finish line with the momentum carrying Rivera crashing to the track.

It was too close to call. Officials examined the photo finish for 15 minutes before announcing Orman the victor by 2/100ths of a second - 4:20.03 to 4:20.05. Orman ran his final lap in 58 seconds - strength had beaten speed at his own game. Yazzie mustered the strength for a sixth place finish, and three more points for the Warriors.

Tuba City's final points of the meet were scored two hours later in the 800m run. Once again, Ryan Yazzie was coming in as the defending champion, but was not at full strength. Full strength or not, Rivera was the clear favorite having run the fastest times in the event all season long, and having won the event as a sophomore in 2008.

Rivera was running to reclaim the crown lost to Yazzie in 2009. Rivera dashed to the front immediately, and quickly gapped the trailing pack led by Yazzie. Orman was deep in the pack in fifth place. With 300m to go, Rivera held a large lead, but Yazzie suddenly made a burst similar to his victorious run last year.

In 2009 Yazzie had run from last to first in the final lap to win by 10 meters. On this day however, it was not to be as his legs gave out on the final turn. Orman shifted gears, passed three runners in the final 100m, and pumped both fists in the air as he crossed the line in second. Rivera won easily in 1:57.15, Orman placed second in 2:00.81, and Yazzie dropped to sixth in 2:03.21.

Freshman Jaylin Sanders led off the relay with a 67.9 second split. Johnson, running with tired legs in her fourth race, ran the second leg in 67.5. Most responsible for the school record were sophomore's Jamie Roe who ran 63.8, and Natalie Franklin who anchored the squad with a 62.8.

Roe had an outstanding first season running track and field. She was the 3A North champion in both the 100m and 200m setting school records in both events. Adding a 4x100m relay qualifier, Roe qualified for four events at the state championship meet. Other individual event qualifiers for Tuba City included senior Ashley Franklin the discus, junior April Tracy in the 3,200m run and the 800m run, sophomore Natalie Franklin in the 400m dash and the 800m run, freshman Jaylin Sanders in the 300m hurdles, and sophomore Mathew Murray in the high jump and 800m run.