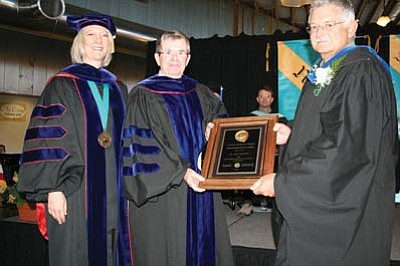 "As a governing board member  for the past several years and being involved with CCC for over a decade, it has been exciting to see the two institutions creating together," Hurley said.

The Distinguished Service Award is the highest award granted by CCC, and is an opportunity to recognize a member of Coconino County who has exhibited exemplary service, leadership, and support of the College.

Haeger was nominated by members of the CCC community for his unwavering support and advocacy for community colleges. He was also selected because of the partnerships he has brought to fruition by working with CCC.

The CCC2NAU program designed to create a seamless transition from CCC to NAU through institutional collaboration and tailored advising is one example of Haeger's collaboration with CCC. Today, the program serves over 300 CCC students.

The recent signing of the CCC/NAU Cline Library merger agreement which will allow CCC students greater access to NAU's vast library databases and resources is another example of his interest in seeing CCC students succeed in their pursuit of baccalaureate degrees.

In addition, Haeger's many contributions to education through his leadership at NAU and its positive impact on Coconino County were also factors in the committee's decision.

Leah L. Bornstein, CCC President, said, "It has been and continues to be a pleasure to work with John. His willingness to explore new and different partnership ideas between CCC and NAU exemplifies his commitment to student access and success."

After receiving his award, Haeger stated, "One of the priorities for education in Arizona is to increase the number of baccalaureate degrees awarded to students each year. The cooperative efforts between community colleges and universities will be an important part of this effort. It is for this reason that I am delighted to be a partner with Coconino Community College and the other community colleges around the state."

"The Distinguished Service Award Committee meets once a year to review nominations, and this year there were three excellent nominees. The award is not necessarily presented each year and candidates truly have to have demonstrated exceptional service to the College and to education in Coconino County to receive the award," said Committee Chairman Scott Talboom.