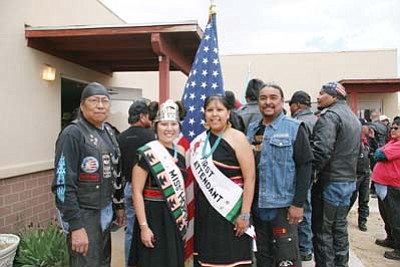 <i>Rosanda Suetopka Thayer/NHO</i><br> Former Marine Sgt. Byron Poocha stands with Miss Hopi 2010, her First Attendant and Reggie Curry. Poocha and Curry, both of Tuba City, are two of the original Honor Riders from Tuba City who have ridden each year in honor of Lori Ann Piestewa. Piestewa’s parents hosted a meal for the riders on May 18 at their home in Flagstaff.

KYKOTSMOVI, Ariz. - Originally inspired and organized in March 2003, the Navajo Hopi Honor Riders (NHHR) organization has grown from its original 15 rider membership to over 250 Hopi, Navajo and non-native participants.

The NHHR members make this annual northern Arizona motorcycle trek from Window Rock to Ganado, Keams Canyon, Kykotsmovi, Tuba City, Bird Springs, Flagstaff and back with many of the riders meeting up with other national veteran motorcycle groups, like "Rolling Thunder" or "Carry the Flame." These groups then travel onto Washington, D.C. for Memorial Day.

The NHHR's mission is to support military service personnel, past, present and future by riding their motorcycles in memory of those who can't. It is also a special recognition to Blue Star and Gold Star Mothers who have lost their sons or daughters in battle.

During the first run in 2003, Noble and his group went to the Piestewa home in Tuba City and were welcomed with open arms by Lori's parents, Terry and Percy Piestewa.

The Piestewas now live in Flagstaff with Lori's two surviving children, Brandon and Carla. But Noble still makes it a point to stop at their home each year.

On May 18, the group rode from Window Rock to Kykotsmovi, and then to Bird Springs and finally into Flagstaff.

Waiting for the riders was a dinner hosted in the Piestewa home, situated at the base of the majestic San Francisco Peaks.

Also during that day, Hopiland hosted the NHHR group at the elderly center in the village of Kykotsmovi. Everyone enjoyed barbecue burgers and hot dogs in appreciation of the NHHR group making a special stop at Hopi tribal headquarters.

Kykotsmovi Village Governor Antone Honanie expressed deep appreciation to the NHHR members. "We just recently lost one of our own Hopi tribal warriors, the last of our Hopi Codetalkers, Travis Yaiva and I just want to express how honored we are in this village and our reservation to have you remember our fallen warriors like Yaiva in this way, by riding for them."

He added, "Please be careful in your ride throughout northern Arizona and for those of you Hopis and Navajos that are going with the national motor group to Washington, D.C., we want you to be careful on your journey. We are so proud of you and your military contribution to our freedom and our country."

Miss Hopi Janelle Puhuyesva and First Attendant Verna Thompson were also on hand to welcome the NHHR group. They made a special point to welcome two original Hopi members of the NHHR, Byron Poocha and Reggie Curry, who have participated in the honor run since its inception.

Both Poocha and Curry worked at the Tuba City School District with Piestewa's parents and also remember her growing up in their home community.

Poocha, who is Hopi and Pima, is a former Marine sergeant who proudly served from 1975-1979. He continues to partner with Curry, who is Navajo and Hopi. Both hail from Tuba City.

Poocha stated, "I hope that the public knows that we are being supportive to our military members who see us, especially when we do escorts and welcome home rides. We are non-family members who recognize what each of these Native military personnel has done and what they have been through. We put a lot of effort into the annual Honor Run. We ride for hours in all kinds of weather to be able to support one another in these short ceremonies to honor them and we all pay our own way. It's the only way we can show our personal gratitude and respect as a Native group. Natives know what it means to leave your family and reservation back home and fight for your country. Natives deeply acknowledge that commitment."