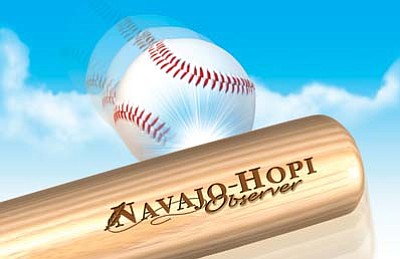 WINSLOW, Ariz. - The Winslow Lady Bulldogs defeated the Holbrook Lady Roadrunners and the River Valley Lady Dust Devils on May 7-8 in the first and second rounds of the Arizona State 3A Conference Softball Tournament. The win over Holbrook was 15-5 and the win over River Valley 9-4. The wins set up a semi-final game on May 7 against the Eloy Santa Cruz Dust Devils. Santa Cruz defeated Snowflake 6-1 in their May 8 quarterfinal game.

In the Holbrook game on May 7, Winslow took a 2-0 lead in the bottom of the first inning on two errors, a walk and a single by Bernice Gover. Holbrook cut the lead to 2-1 in the top of the second on an error and singles by Sandi Spitdon and Kelley Bakurza. Winslow increased the lead to 6-1 in the bottom of the second on two walks, two errors, a hit batsman and singles by Jennifer Yazzie and Felicia Nagle.

Megan Newtonbender homered for Holbrook in the top of the third but Winslow scored in the bottom of the frame on a walk and a single by Mireya Ulibarri. Four runs on five hits and a walk increased the lead to 11-2 in the bottom of the fourth. Singles by Gabby Stacey, Ulibarri, Nagle and Becka Perez and a double by Mallory Smith comprised the rally.

Holbrook scored three times in the top of the fifth on a double by Nicole Baldwin, an error and a walk to cut the lead to 11-5. Winslow scored four times in the bottom of the fifth to invoke the 10-run mercy rule. In the rally there were two walks, an error, and a double by Melissa Jacobs and singles by Smith, Ulibarri and Kyli Parsons.

Against River Valley on May 8, Winslow took a 2-0 lead in the bottom of the first inning on singles by Mireya Ulibarri, Jennifer Yazzie and Bernice Gover and a walk. A triple by Gabby Stacey and an error increased the lead to 3-0 in the second inning. River Valley cut the lead to 3-2 in the top of the third on a walk, a single and an error, then took a 4-3 lead in the top of the fourth on two walks and a costly error.

Pugh got the win in relief of Yazzie. Yazzie had worked the first four and a third innings and given up four runs on five walks and a hit. She fanned five. Pugh gave up a run on a hit and a walk and fanned one in her two and two thirds innings of work.