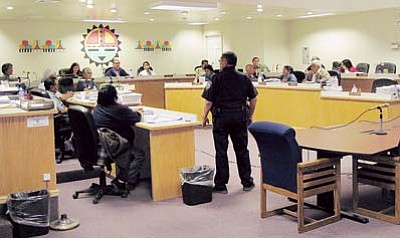 <i>Rosanda Suetopka Thayer/NHO</i><br> For the third day in a row, Hopi Chairman LeRoy Shingoitewa was forced to ask Hopi tribal rangers to assist him in removing the First Mesa and Mishongnovi council representatives who continued to remain in council seats that had not been won by proper election in their villages. Shingoitewa would not start the council meeting until they were physically removed from the council chambers.

KYKOTSMOVI, Ariz. - It had been three days of the latest wrangling between Hopi Tribal Chairman LeRoy Shingoitewa and Phillip Quochytewa, a Kykotsmovi Village council representative, on who could formally call an "official tribal council meeting" for the Hopi Tribe.

This resulted in the Hopi chairman pointing out to Quochytewa that only the chairman or the vice chairman (in the chairman's absence), can be the "official presiding officer" to conduct or call meetings of the Hopi Council, according to Article 1, Section 1 of the Hopi Constitution.

But Quochytewa's insistence on invoking a two-year-old resolution forced Shingoitewa to call for Hopi tribal rangers to clear the council chamber headquarters of seven "appointed individuals" from First Mesa and Mishongnovi villages who support Quochytewa on May 11-13.

The resolution, H-007-2009, passed in December 2008, named Quochytewa as the "presiding officer" and gave broad signature authority to Mary Felter, secretary of the council, and Russell Mockta, tribal treasurer, and hired Ivan Sidney Sr. as a "special assistant" to the Hopi Council at that time,

Chairman Shingoitewa stated, "We are not going to allow this anymore. This council is going to go by the rules, all the recent court orders and the Hopi Constitution. We are going to tend to tribal business because everytime we have a situation like today, it puts everything aside and we have a lot of work to be done.'

The seven individuals Shingoitewa spoke about remain in council seats though they do not meet the required "elected" status as required from the Hopi Constitution to serve as official representative for their village communities.

This final answer and opinion in the matter of a certified question from the village of Bacavi about Hopi Council representation was supported by the Hopi Appellate Court issued on Feb. 11, which Shingoitewa has since tried to enforce against Quochytewa and his supporters without much success.

A final clarification on who is the formal and true presiding officer for the Hopi and Tewa people as stated in the Hopi Constitution was put on the Hopi Tribal Council record in Thursday afternoon's council session by rescinding Resolution H-074-2008, penned two years ago, which advised and allowed an "interim presiding officer" after the Hopi Council forced former Hopi Tribal Chairman Ben Nuvamsa from office.

In all, seven new action items and resolutions were introduced and authored by two current Upper Moencopi village representatives, with support from village Governor William Charley and Lt. Governor Mary Navanick, who were both in council chambers that day.

Upper Moencopi representatives Everett Calnimptewa and Leroy Sumatzkuku took on a full sweep of political change for their Hopi Tribal membership on May 13, which included the immediate termination of longtime General Counsel Scott Canty, who had been with the Hopi Tribe for 19 years, and his assistant, Rebecca Plevel, Assistant General Counsel.

Additional resolutions that will have major impact on the Hopi community are suspension and immediate hearings for Hopi Tribal Secretary Mary A. Felter and Hopi Tribal Treasurer Russell Mockta for a number of alleged violations of the Hopi Constitution.

For Felter, these charges include "disrespectfully ignoring duties in the constitution and by-laws of the Hopi Tribe, exceeding executive authority, neglect of duty, misusing tribal funds to attend personal committee commitments, requesting legal opinions from the Office of General Counsel on sensitive matters without Hopi Council direction or explicit authorization, creating confusion as to her duties and responsibilities during Tribal Council meetings, [and] calling meetings of the Hopi Council without proper authorization."

Mockta also faces a list of charges, including "inability to properly manage the financial affairs of the tribe, unsatisfactory job performance, failure to follow tribal investment policies and procedures and inability to carry out the duties of the office in a professional manner including violation of the tribe's personnel polices."

Shaking up the political week at Hopi, representatives Calnimptewa and Sumatskuku also introduced and got approval for resolutions that reinstated the Hopi tribal newspaper, the Hopi Tutuveni, and formally rescinding tribal resolutions H-074-2008 and H-007-2009, which provided for the current tribal council to select a presiding officer other than the Chairman or Vice Chairman to preside over meetings, the designation of Phillip R. Quochytewa as presiding officer, broad signature authority to Felter and Mockta and the hiring of Ivan Sidney as a "special assistant" to the council.

Sidney was formally removed from the Hopi Council two years ago for a public intoxication incident, which, according to Article V, Section 1, Hopi Constitution, states that any Hopi official including representatives will be automatically removed if found guilty of a misdemeanor, including dishonesty, of a felony or of drunkenness with the council refusing to further recognize them.

Hopi Chairman Shingoitewa called for a recess of the Hopi Council until May 25.