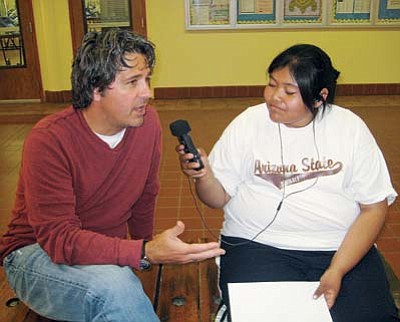 Unfortunately, the students weren't able to go down for the event. However, the following week, Arizona Highways Editor Robert Stieve and Associate Editor Kelly Kramer came to Hopi High and consequently they presented the awards to the students.

Editor Stieve said the awards were impressive and the Hopi High media students should be proud of competing at such a high level.

were presented to them by Arizona Highways Editor Stieve and Associate Editor Kramer.

"It's not everyday you get to meet an editor from one of the best known magazines," she said.

"I was happy that the award came from somebody whose had the experience of writing and editing," she said.

Melsena Harris, another broadcast radio award winner, said it was nice for somebody from a well-known magazine to take their time to give out the awards.

For example, a recent edition of Arizona Highways focused on some of the state's best restaurants. Readers will then go to those communities and try those restaurants spending a lot of money along the way.

Kramer said she loves her job because she gets to travel the state and write about it. She was interested in Arizona Highways because of the beauty of the state and its images.

Kramer and Stieve both noted that Arizona Highways hits a diversity of topics from mother nature to hiking, history and culture.

Sockyma won excellent ratings for her commentary about how seniors look forward to graduating and in sportscasting for boys win state.

Sehongva, who plans to major in psychology at Northland Pioneer College, won an "excellent" for a commercial about potato boards and for girls win state in the sportscasting division.

Rucker, who plans to major in broadcast journalism at Arizona State University's Cronkite School of Journalism and Mass Communication, earned "excellent" in the newscast division for H1N1 concerns.

Harris, who plans to attend a technical school in Phoenix, won honorable mention for a public service announcement about health care and in the feature story division for her report on General Valley Hospital.

Sehongva won two honorable mentions for her commentary about preventing suicide and in the public service announcement about health care.

Honyaktewa, who plans to major in early childhood development at Coconino Community College in Flagstaff, won honorable mention for her newscast about the Haiti earthquake.

Poleyestewa, who plans to major in business at Fort Lewis College in Colorado, took home an honorable mention for her feature story about JROTC Visits Hawaii.

In the journalism division, Alvina Gilmore took home second place or "excellent" for her editorial about making water available. Gilmore plans to join the Air Force as she desires to become a pilot.

LeAnna "LeLe" Leyva won honorable mention for her editorial about electronics policy needs to be updated. She plans to major in print journalism at ASU's Cronkite School of Journalism and Mass Communications.

Leyva, who is also a radio student, interviewed Stieve and posted the interview on PRX, also known as Public Radio Exchange. Those who want to listen to the interview can log onto prx.org.