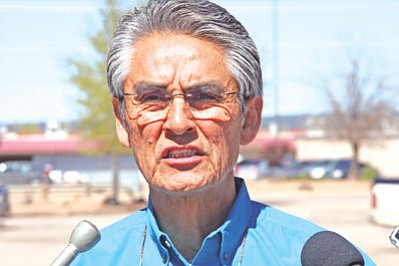 However, according to a press release from the Navajo Nation Speaker's Office, President Shirley is ignoring Navajo Nation law by filing for a third consecutive term as president. A recent legal opinion from the Chief Legislative Counsel reaffirmed the two-term limit of the Navajo Nation President set forth at 2 N.N.C. 1002 (C).

In remarks to the press outside the NEA office, President Shirley said he was seeking a third term in order to continue his work to stabilize the Navajo Nation government through government reform. "We have started in a good way and need to keep going," he said. "We believe the Shirley Administration is the only one best to continue and to complete the job. There is much support out there with the people."

Asked if his candidacy was an act of defiance, President Shirley said he didn't see how he was defying anyone or any law.

"As a public official, as a public servant of the people, I have to listen to the people," he said. "And as I'm standing here with you, there is a lot of support out there, 'Can you run again? We want you to run again.' Taking all that into consideration, here we are. I don't see how listening to the people, working with the people, can be defiant to anything or with anyone."

President Shirley is seeking to use Diné Fundamental Law although the Council restricted use of this law to the Peacemaking Courts of the Navajo Nation.

The provisions of Diné Fundamental Law, as amended by Resolution CJA-08-10 state, "Foundation of the Diné, Diné Law and Diné Government does not supersede Navajo Nation statutory laws or policies." 1 N.N.C. § 200 (A). The Diné Fundamental Law further provides that it "does not delegate authority to substitute alternatively formulated 'fundamental laws' or policies instead of Navajo Nation laws or policies (Diné bibeehaz'áanii) duly-adopted by the leaders of the Legislative Branch."

Accordingly, the Council argues, it is clear that the language of 2 N.N.C. § 1002 (C) cannot be overcome by claims that the Presidential two-term limit is invalid on the basis of claimed inconsistency with the Diné Fundamental Law.

The legal opinion also cites to term limits for Executive Branch heads of other sovereign governments. Our own federal government maintains a constitutional two term limit for the U.S. President while 36 states impose term limits on their governor as well.

Regarding the validity of the presidential term limits imposed by the Navajo Nation Council, he said that should be up to the people to decide.

"The people have a sacred right to elect who they want their leader to be," he said. "We cannot frustrate the people with laws that are not fair."

As part of his platform, President Shirley calls for renewing the concept of a government reform convention that would bring leaders and citizens from across Navajoland together to discuss and implement needed reforms that the people support.

"Much hinges on comprehensive government reform," President Shirley said. "We need to continue working on it and get it done. The most important, the people have a right to determine who should lead their nation. This is their government and their resources. At this time, government reform is so vital and we need to complete the job."

Asked if he would fight if the Navajo Election Administration or the Council challenges his candidacy, he said, "Definitely."

"This is an office that belongs to the people," he said. "The people should decide who their leader should be."