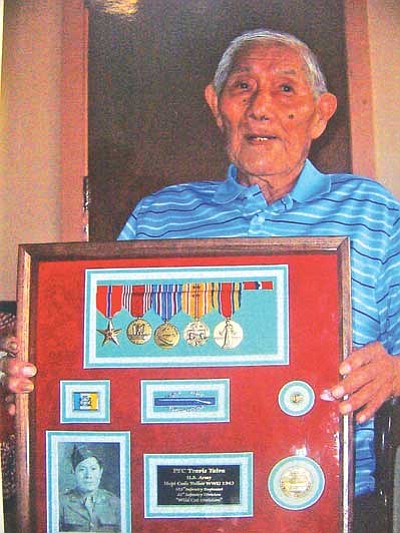 Travis S. Yaiva proudly shows a display case of his medals and honors from his military service.

POLACCA, Ariz. - On April 16, the U.S. flag flew at half mast at the Hopi Health Care Center and across the Hopi Reservation in honor of the passing of Travis S. Yaiva, who served our country as a Hopi Code Talker. He had passed away early that morning at the age of 89.

"It is with sadness that I inform you of the passing of Mr. Travis Yaiva, veteran and last WWII [Hopi] Code Talker," Honanie wrote in an e-mail circulated at the hospital. "In his honor, the U.S. flag is now being flown at half mast. And it is in his honor and remembrance that I ask you to take a few moments to reflect on his contribution to our people and this great country. Because of his service each of us continues to enjoy our freedom and liberties on a daily basis."

Darren Vicente, the clinical director of HHCC, is Yaiva's grandson. Vicente took time on April 28 to remember his grandfather.

"He was a humble man," Vicente said. "He did not see himself as a hero."

Vicente said Yaiva would not have wanted an obituary, but his family wanted to acknowledge that a chapter of Hopi history closed with Yaiva's passing.

"Our grandfather would not have sought recognition for himself, but he had a lot of respect for his fellow veterans," he said.

"He respected others efforts to seek recognition for Hopi Code Talkers, and he supported that. He would not speak of that part of his life and or what happened.

When asked whether Hopi Code Talkers had won the recognition sought, Vicente said that there has been some efforts, including an event held in the fall of 2007, where Hopi Code Talkers were honored formally for the first time. Yaiva appeared at that event - the only surviving Code Talker. At that time he was wheelchair bound - accompanied by granddaughter Cassandra Yaiva and Vicente.

Over 400 Navajo Marines served as Code Talkers in World War II; these men were immortalized in the move "Wind Talkers," starring Nicolas Cage and Adam Beach. Navajo Code Talkers also received Congressional Medals of Honor. But little is known about the men from 18 other tribes - including 11 Hopi - who also served their country by utilizing their language to confuse the Japanese. Yaiva added his voice to the struggle to win recognition for his fellow Hopi Code Talkers.

Gov. Jan Brewer sent a letter to the family through Hopi Tribal Chairman Leroy Shingoitewa, which was read in Bacavi.

In the letter, Brewer offered her condolences, and recognized the lives that Yaiva had saved.

"I met Travis [during a visit to the Veterans Hospital in Prescott] and I cherish the honor of being in the presence of a true hero," Brewer said.

Vicente said that the family recognized the many people who came to the traditional veteran's ceremony and burial, and all of those who gave their support and help throughout.

"We appreciate the outreach we received from state and tribal leaders, from our aunties and members of the Bear Clan, from veterans and others who just respected what our grandfather did for this country - we appreciate the time and effort on our behalf."

Vicente and other family members acknowledge Yaiva's role as patriarch.

"He took care of people after the war," Yaiva said. "He served as the Community Health Representative. He was a man who brought our family forward."

Again, Vicente acknowledged Yaiva's stand that he was not a hero.

"We've always respected him more for his humility, and first and foremost he was a phenomenal Hopi farmer," Vicente said. "He was a great father and grandfather and the patron of our family. He will be missed."