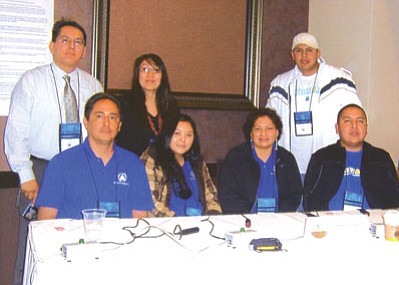 TSAILE, Ariz. - Diné College competed against tribal colleges in the Knowledge Bowl at the 29th annual conference of the American Indian Higher Education Consortium (AIHEC) conference in Chandler March 20-23 and came home with third place among 27 schools who entered the competition.

The Knowledge Bowl is similar to Jeopardy. Students are asked questions from selected books and/or films by a Quiz Master. This year's competition was based on seven books and a film. They were: West of the Thirties: Discoveries Among the Navajo and Hopi; What Can Tribes Do?: Strategies and Institutions in American Indian Economic Development; Pueblo Nations: Eight Centuries of Pueblo Indian History; Creek Indian Medicine Ways; American Indian Sovereignty and the U.S. Supreme Court: The Masking of Justice; Imagining Head-Smashed-In: Aboriginal Buffalo Hunting on the Northern Plains; Sweet Smell of Home; In the White Man's Image (PBS film).

The three-day double elimination tournament at the Wild Horse Pass Hotel and Casino brought hundreds of students from 37 tribal colleges who are members of the AIHEC organization.

If Diné College's team had beaten Turtle Mountain Community College, they would have faced Salish Kootenai the second time around for another game. But unfortunately the team lost to Turtle Mountain with a tie. The DC team waged more than the opponent; waging 80 to our 70 points and thus was close to playing for the championship game.

In preparing for the tournament, the students had to read all the books and view the film in less than five weeks. As full-time students carrying 12 credits, they had to make extra time to read and study for this competition.