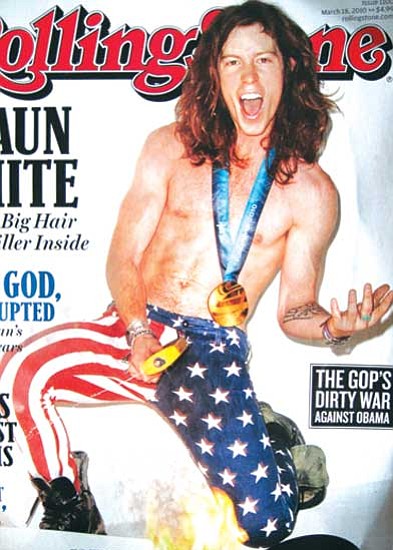 Olympic snowboarder and gold medalist Shaun White, 23, was so inspired by his most recent win at this year's 2010 Olympic games that he and his father decided to commemorate the win by getting new arm tattoos.

At first, White's dad suggested, getting the Olympic circles or possibly a middle Eastern philosophy symbol, but White had his own idea.

He wanted to get a tattoo that symbolized the strength and endurance of America's First People and that was somehow connected to water or snow. That's when he saw the Hopi rain cloud symbol and knew that was the one for him. He had this symbol inked on his left forearm.

White astounded a worldwide audience with his free style half-pipe skills at this year's Winter Olympics. He first started skiing and skateboarding as soon as he could walk, and by age 4, became a very accomplished skier. He won his first amateur snowboard event at age 7.

White, who was born and raised in San Diego, encourages young students to push themselves. He himself was plagued by congenital heart defects and had two surgeries before he was 2-years-old, but through sheer will and determination went on his way to become a professional snowboarder by age 13 with formal sponsors and endorsements.

So far, White has won 16 Olympic game medals - a record 10 of them are gold medals.

White has gone undefeated with 12 victories in the past few years, being the first ever athlete to ever sweep the five-event U.S. Grand Prix series, which serves as the Olympic qualifier.