Alice's Place - a shelter in a storm 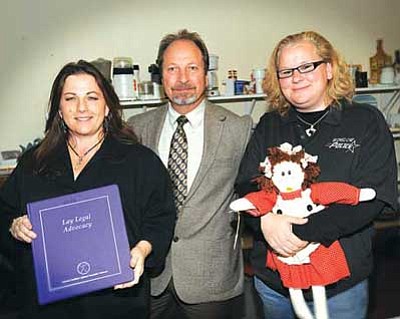 WINSLOW, Ariz. - If you go to 312 W. Second St. in Winslow, you'll find the location of help for victims of domestic violence. Alice's Place is a thrift shop similar to Salvation Army but it has a larger agenda than just used clothing. Alice's is a resource in which to turn during a crisis of domestic violence. There is a counselor on duty 24 hours a day at (888) 531-7233 providing assistance to individuals and families. Most victims are women but men are served as well.

Alice's Place can provide many types of assistance, including but not limited to:

Alice's Place was established in 2000 by a group of Winslow citizens who realized that there was a great need for an intermediary between domestic violence victims escaping from their abuser or during police intervention and a final resolution of their plight. Usually domestic violence victims are unable to break out of their abusive relationship without help from a mentor in the community.

Tours are offered on the fourth Thursday of each month at 6 p.m. at Alice's Attic, 312 Second St. The tours are called "If These Walls Could Talk" and explain services available and stories about anonymous local victims of domestic violence. The tours are free. Don't be shy about bringing someone with you.

In 2009, Alice's Place served over 120 victims and their children. They provided 115 bed nights along with 300 food and hygiene bags and took over 300 crisis calls on the 24-hour hotline. With the transportation program, Alice's helped 25 families reach safety. The thrift store helps qualified individuals with free clothing for summer and winter needs.

A relatively new program called Teen Dating Violence Awareness was implemented in 2009 and received a Mayoral Proclamation in January 2010 proclaiming February as Teen Dating Awareness Month in the city of Winslow.

For shelter from a stormy and abusive relationship, Alice's Place is the place.