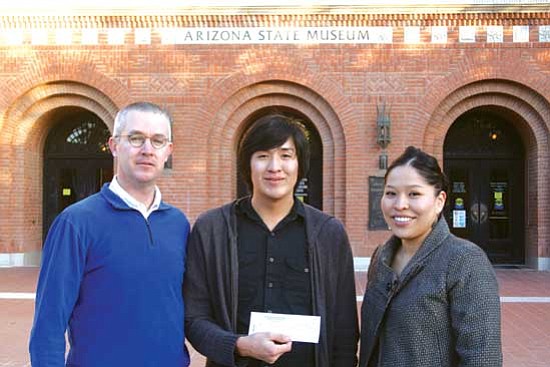 TUCSON, Ariz. - The Northern Arizona Native-American Foundation (TNANAF) recently awarded a $1,000 scholarship to Jeremy Albert Wartz of Chinle in a recent ceremony at the University of Arizona.

TNANAF Executive Director Brian Buckley and Board Member Genevieve Bennally presented Wartz with the scholarship. Wartz was selected based on his outstanding essay to TNANAF.

Wartz will pursue his degree in Political Science at the University of Arizona.

His long-term goal is to attend the University of Chicago Law School in order to work for justice and equality.

Benjamin Owens, a mathematics teacher at Chinle High said of Wartz, "Jeremy's enthusiasm toward education is remarkable. In addition, his level of compassion for his friends, elders, and peers made him such an important asset to our school's general health and atmosphere."

For more information about donating to TNANAF or to apply for scholarships, visit www.tnanaf.org. The deadline for the next series of applications is May 1.