A Tale of Two Trails: Peavine and Brins Mesa 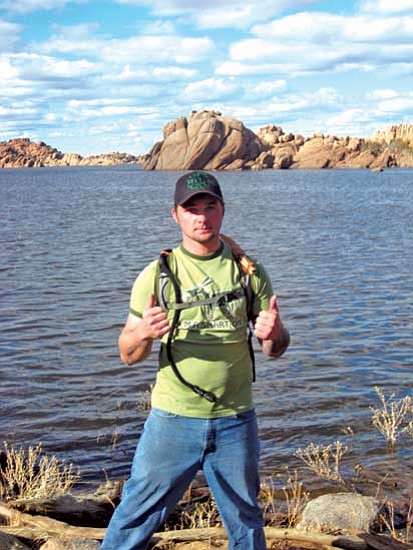 PRESCOTT and SEDONA, Ariz. - Spring break is a great time to get back on the trail, so this is a story of two hikes: Peavine Trail in Prescott and Brins Mesa Trail up to Chimney Rock in Sedona.

Grandson Nick Basham and I took off on the Peavine Trail, which parallels Watson Lake. This is a dream hike for wildlife or bird lovers. Ducks, herons and other birds can be found at Watson Lake. On this day, we happened to spot an eagle landing on a rock near the lake.

On a nice day, this trail can be filled with people of all ages either walking or biking. Lesser traveled trails can be found, including the dotted trail that follows most of the bank by the lake although this may include some rock hopping.

Hikers can go five miles one way to Side Road for a nice 10 mile roundtrip hike. Those who want more can turn right at the 3.4 mile mark as they can pick up the Iron King Trail for another 4.5 miles to the trailhead at Glassford Hills Road in Prescott Valley.

Grandson Nick and I hiked a tad more than eight miles just following the main trail four miles in and then coming back on the dotted trail next to the lake on the way back--that's when we spotted the eagle.

The scenery includes the marvelous boulders nestled throughout Watson Lake. The scenery of Brins Mesa Trail to Chimney Rock is quite different but equally thrilling offering the red rocks of Sedona including the marvelous sandstone bluffs that many consider the best scenery in the Southwest.

On this day, 16 members of the Prescott Hiking Club took the trek led by 80-years-young Lois Eckman. Not much water is found on this trail, just a few small mudholes in some mostly dried up streams.

We started on the Brins Mesa Trail, but Eckman led us through other trails up to the base of Chimney Rock. Brins Mesa is 3.8 miles one way by itself. Our trek clocked in at 10.8 miles.

This hike includes passing a huge sinkhole and many other trails including Tea Cup, Soldier Pass and Lizardhead Trail. Several of the hikers scrambled up to the base of Chimney Rock where the scenery is spectacular.

The Peavine Trails offers virtually no change in altitude. Brins Mesa Trail has several small ups and downs, but only goes up 300 feet (from about 4,600 to 4,900) for those who climb up to the base of Chimney Rock.

Blue jays, scrub jays and other birds were spotted along Brins Mesa Trail.

The Peavine Trail offers sycamores, willows and cottonwoods. Brins Mesa has Manzanita and other brush along with cyprus and juniper. The flowers weren't out yet, but should be soon. See you on the trail.