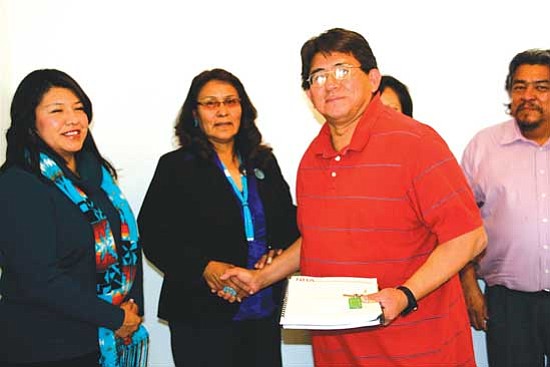 <i>Photo by Christian Bigwater</i><br> Tuba City Housing Director Judy Begay presents new homeowner Jonathan Smith with keys to his new home during a reception held in Tuba City on March 11. Smith's family was one of four who were selected for a new scattered site home.

TUBA CITY, Ariz. - The Smith family, of Tuba City, had reason to celebrate, as they were one of four Navajo families moving into a brand new scattered site home built by Navajo Housing Authority (NHA) through its general contractor, Dean Douglas Construction.

The event located east of "TC Hill" and North of Tuba City High School was the site of a housing reception being held to present keys to the four new homeowners.

The event was well attended by community members, homeowners, NHA staff and board of commissioners along with Navajo Nation delegation.

New homeowner and veteran Jonathan Smith was more than happy to host the reception in his new home, "I love it, it's great, it's a dream come true," he said. "I've always wanted a home and it's been one of my dreams to have a home."

Aneva J. Yazzie, Chief Executive Officer of NHA, provided a welcome address and gave a brief overview of the project.

"This is a momentous occasion for all the families that we are serving here today," she said.

"This project is a collaborative effort between NHA and the Arizona Department of Housing (ADOH)," she added. "ADOH provided a grant from the Arizona State Housing Trust Fund in the amount of approximately $454,000 to assist with infrastructure costs for these ten units."

Yazzie emphasized the use of green technology for energy efficiencies designed in the construction of these homes.

"We are adopting a green policy so a lot of green technology and green materials were incorporated into these homes to cut down on utility costs," Yazzie said. "We are building our homes with that 'green' perspective in mind."

Other speakers were invited to the event to address the new homeowners. Among them was Bruce Scott, Director of NHA's Housing Management Department, who congratulated the new homeowners and stressed the responsibilities of home ownership.

"You are realizing a dream of home ownership today," Scott said. "But then again with that dream comes responsibilities."

Scott explained that under the housing management office the new homeowners have executed a mutual help homeownership agreement and have accepted three conditions: first, to cover all administrative payments; second, to cover utility costs; and lastly, to provide routine maintenance of the housing unit.

Ron Lee, Northern Arizona Regional Manager for Dean Douglas Construction, was delighted to have been a part of this project.

Lee honored the three veterans moving into homes today by mounting U.S flags on the face of each of their homes.

"Nothing makes me happier than to drive down this dirt road and see new homes," she said.

"This is where it begins. Your home is where all of your happiest times are going to happen, where young people come and grow, where they become productive members of our community, and where your children and grandchildren are going to learn how to be good adults."

Lone Tree referred to NHA's motto as being appropriate for what is happening here today. "I like the motto for NHA, 'Center of Family Growth, Strength and Beauty' and it certainly is that," said Lone Tree to the new homeowners. "So enjoy your homes - take care of it."

Other speakers invited to address the homeowners were David Nez, Department Manager of the Navajo Veterans Department; Patrick Sandoval, Chief of Staff, Navajo Nation Office of the President and Vice President; and NHA board of commission members Frank Donald and Ray Wilson. Also present was former Navajo Chairman Peter MacDonald who provided the closing prayer.

The contract on the 10 housing units was executed Aug. 18, 2009. Four of the homes were completed and inspected on Feb. 23.  Final inspection of the homes was made on March 3and the units were deemed ready for occupancy. During that time, the following four families were allowed to move into their homes: Nona Sombrero, Thomas Yazzie, Jonathan Smith, and Marcella Tohannie.

Weather and access to job site is the cause for construction delays for the remaining six units, which are planned for completion within the next six months, NHA representatives stated.