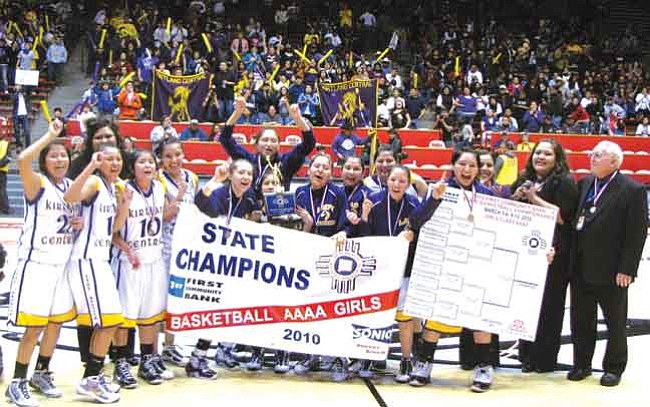 The rivalry between the Kirtland Central Lady Broncos (26-2) and the Shiprock Lady Chieftains (24-8) continued in the Class 4A Girls title game, which was won by the Lady Broncos 71 to 52. In the Class 3A Girls state championship game, the Running Lady Braves of Santa Fe Indian School (23-6) were 56 to 50 overtime winners over the Lady Dons of West Las Vegas (28-5) while the Navajo Pine Lady Warriors (23-3) lost to the Texico Lady Wolverines (26-5), 55-40.

In boys' basketball action, the 5A Class Gallup Bengals were eliminated in the second round by the Mayfield Trojans, 69-53. The Bloomfield Bobcats were upended by the eventual State Class 3A champion Hope Christian Huskies, 72 to 48, while the Braves of Santa Fe Indian School were defeated by the Sandia Prep Sundevils, 56 to 50.

The Kirtland Central Lady Broncos, who were seated number one in the state rankings, had set a season-long goal to win the New Mexico state championship. This goal was accomplished, Coach Charles Kromer said. "Amanda [Kerr] came to me and said I want to win a state title before I graduate."

Kromer continued, "Of all the years I have coached, I have never had a team with a work ethics like this team - the camaraderie of this team is amazing."

Kromer, who coached the Shiprock Chieftains for two seasons before moving on to coach the Lady Broncos, has 609 career wins. "We wanted a nice even number like 610, but we were one shy," Kerr said.

The Lady Broncos' championship run, began with a first round win over the Santa Teresa Lady Desert Warriors, 68 to 29, followed by a 44 to 32 second round triumph over the Lady Knights of Albuquerque Del Norte. In the semifinal, Kirtland defeated the Lady Sundevils of Espanola Valley, New Mexico, 52 to 47.

Kerr, who scored a game high 23 points, answered the Lady Chieftain's Mishauna Todacheenie's opening three ball, with a bucket. A short lived Shiprock advantage of 6 to 4, which was to be Shiprock's last lead of the game, was quickly erased with a 8-2 Bronco run, that led to a first quarter lead, 12 to 8.

Kerr, determined to win the Bronco's first state title, after a five-year drought, scored eight of Kirtland's 17 points that lead to a 29 to 22 score at the half. Five Lady Chieftains kept the game within striking distance, a majority of the field goals came inside the arch.

The third frame was huge. Kirtland hit four three point buckets, two by Darla Woody, one by Taradena Mitchell and a buzzer beater by Kerr. Shiprock's Kalen Henderson connected on two threes and Courtney Benally added one, combined with five points by Todacheenie that kept the difference below seventeen points. The third period ended with Kirtland leading 54-41.

All year long the Lady Broncos employed an obstinate defense that was impermeable, so the Chieftains went to the perimeter game with Henderson's trey and Todacheenie's four points, which was offset by Kerr.

Kerr blocked a shot attempt and drove coast to coast for score and after a defensive rebound. She was on the receiving end of a full court pass and easily scored again. Kirtland went on 11 to 8 run to close out the state's number two ranked Lady Chieftains, 71 -52.

The Lady Broncos now lead the New Mexico State Championship Tournament series, with a 5 to 4 edge over the Lady Chieftains. They were led by Kerr with 23 points, followed by Darla Woody with 16 points.

"We played okay tonight," said Shiprock Coach Brady Rivers. "But you can't win a state championship by playing okay, you have to play well."

The Chieftains were led by Kalen Henderson had a team high 15 points, Mishauna Todacheenie added 11 points.

Jenine Coriz, a junior, led the Santa Fe Indian Schools' Lady Running Braves to their first ever New Mexico Class 3A Girls state Championship with a game high 25 points - five of those points came in overtime. "Jenine is one of the best players I ever coached at the collegiate or high school level," said Cindy Roybal, head coach of the Santa Fe Indian School. The Lady Braves defeated the Lady Dons, a Class 3A District rival, 56 to 50.

The Lady Braves defeated the Newcomb Lady Skyhawks, 64 to 43 in the opening round of the 2010 state high school basketball championships, in the second round they routed Hope Christian Lady Huskies, 62- 42 and in the semifinal game, the Braves held off the Lady Wildcats, 62 to 59.

The Lady Braves dedicated their state tournament championship quest to the memory of Deshauna and Del Lynn Peshlakai, who attended the opening game, but tragically lost their lives in an automobile accident that night.

"We're still a young team - we're making history, I told them," she continued, "I am proud of them."

They made history this season, they made it to the 2010 New Mexico Class 2A Girls State Championship game, a first for the school and the first year coach Watchman-Moore. Last year they were eliminated in the second round.

In the second round, the Lady Warriors got by the Navajo Prep Lady Eagles with a convincing 70 to 40 win in the semifinal game. Navajo Pine ousted the state tournament second seed Santa Rosa Lady Lions, 61 to 56.

In the Class 2A Girls State championship game, they were defeated by the state tournament number one seed, Texico Lady Wolverines, 55-40. Demetria Clichee had a team high 16 points.