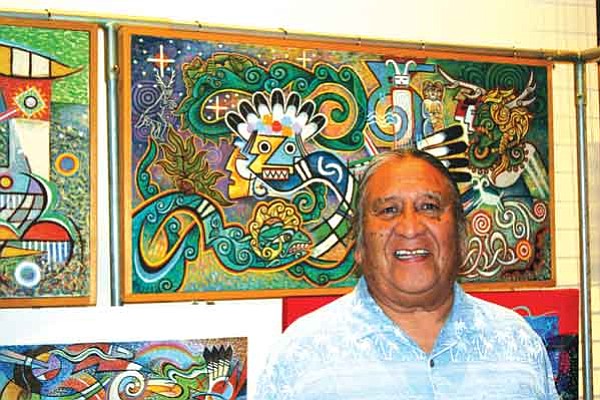 <i>Rosanda Suetopka Thayer/NHO</i><br> Famed Hopi artist Michael Kabotie's life and art was celebrated with a private reception on March 12 at the Museum of Northern Arizona. Kabotie passed away in October 2009. A new exhibit entitled, "Walking in Harmony" showcases pieces of Kabotie's artwork, including very early examples, along with some of Kabotie's personal posessions. The exhibit will run through September.

FLAGSTAFF, Ariz. - The Museum of Northern Arizona's newest exhibit, which opened March 13, honors the life and work of the late Michael "Lomawywesa" Kabotie from the the village of Shungopavi. The exhibit is entitled, "Walking in Harmony."

Kabotie passed away in October 2009.

His traditional Hopi name, Lomawywesa literally means, "walking in harmony," thus the MNA felt it was appropriate for the exhibit to bear the same name.

Kabotie's art, including gold and silver jewelry works, watercolor and acrylic paintings, lithographs and sketches along with his own personal jewelry tools are on display. Also on display are two large triptych panels he created in 2002 along with fellow Hopi artist Delbridge Honanie during their time with MNA's artist in residency program.

There are several sketches and litho prints that have personal observations on them and a photo that shows Kabotie in his early artistic years with his artist Hopi partners, Delbridge Honanie, Milland Lomakema and the late Terrance Honventewa.

Kabotie was born in 1942 on the Hopi reservation and was a member of the Snow Clan. As soon as he could walk, he was surrounded by color, song and kachina background experience backed by the smell of cedar and pinon trees high atop the Hopi mesas all of these having great impact on his artistic sensibilities.

Influencing his life and art was his father, the late Fred Kabotie, a renowned Hopi watercolor artist and muralist who is credited with the founding of the Hopi Arts and Crafts SilverGuild Cooperative.

Kabotie's mother Alice was a skilled basketmaker. Several pieces of his parents' artwork are also on display, creating a sense of familial art history.

It was through his early travel with his father to art shows and museums around the country that Kabotie was inspired to pursue the creative arts for his own life's work.

Kabotie was an avid reader and student of both archaeology and other religious philosophies. He often compared them to his own Hopi culture, which would sometimes inspire biting political or completely humorous life observations in his artwork.

But it was Kabotie's own personal search for a sense of harmony and balance that left the greatest impression on people who knew him well.

Ed Kabotie, one of Kabotie's sons, is also a watercolorist, jeweler and musician. He was at the MNA show and commented on his father's work.

"I think its really impossible to express the varied and complex facets of my father's life and art in just one room, but MNA did much honor to exhibit these works of art and give the audience an idea of who my father was as an artist and a man. It was so generous for them to express their appreciation for his creative work and his life philosophy in this way. I really appreciated that the exhibit remembered how deeply my father was interested in archaeology in his art, he was always looking for that connecting factor, that place in history, where we all join, in culture, history and artistic documentation."

He continued, "This exhibit is a way for outside audiences to see the world through Hopi eyes, since my father was influenced by so much of the foreign world in his everyday life - his work, his philosophy. He used to say, 'Art is not a career, its a journey' and even though he had all these world experiences, his final art interpretation was really from an artistic mythical Hopi place."

"I feel blessed and honored that our family can share at least this part of my father's work, to see the beauty, humor and tradition of his Hopi life. He was truly living up to his Hopi name in the past few years before he died and that to me, will be his gift and legacy," he concluded.

The "Walking in Harmony: The Life and Work of Lomawywesa, Michael Kabotie" exhibit runs through September.