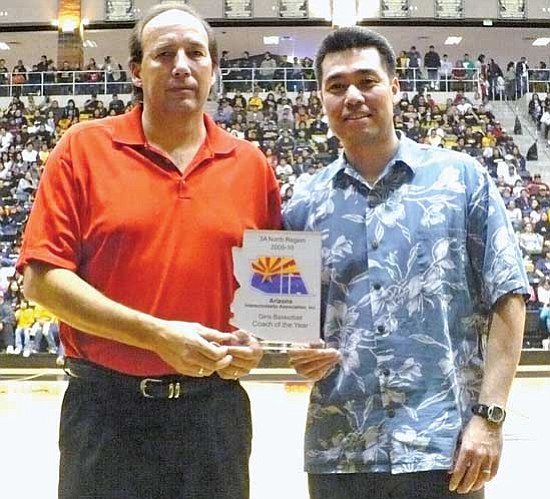 <i>Anton Wero/NHO</i><br> Grey Perkins, of the Holbrook Lady Road Runners, and Charles Chong, of the Window Rock Lady Scouts, were voted 2009-2010 Co-Coaches of the Year for the Arizona 3A Girls North Region.

Greg Perkins of Holbrook and Charles Chong of Window Rock were named Co-Coaches of the Year for the region in girls' basketball.

Winslow High School senior Kourtney Shirley has been named the 3A North Region Girls' Basketball Player of the Year at the conclusion of the 2009-2010 season. Kourtney led the Lady Bulldogs to the Arizona State 3A Conference Championship and has been a key ingredient to success of Coach Don Petranovich's last four teams which won three state championships and were second in another.

Winslow had three other players named to the All 3A North Region team. Seniors Shernise Ward and Paige Shirley were joined by junior Gabby Stacey to the elite squad. Senior Jennifer Yazzie and junior Felencia Keams received Honorable Mention.

Jamie Roe of the Tuba City Lady Warriors was selected to the All 3A North Region Team. Angel Tacheene and Vernene Sheppard received Honorable Mention.

Jasmine Taliman of the Ganado Lady Hornets was named to the elite squad and Jennifer Salabye and LaNaya Roanhorse received Honorable Mention.

Nicole Tsosie of the Chinle Lady Wildcats was a member of the All 3A North Region Team and Tia Dalton and Samantha Pahe received Honorable Mention.