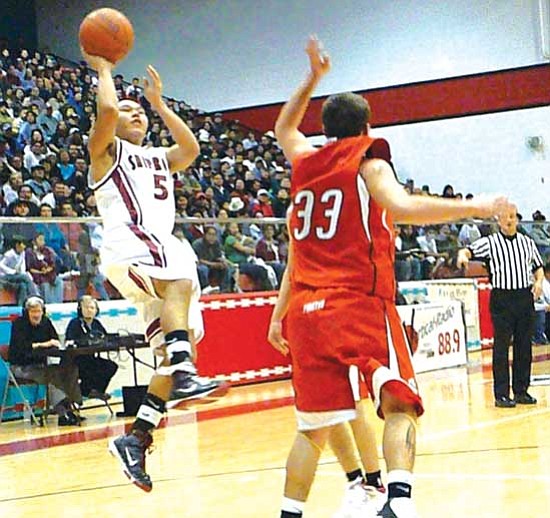 The venue for the second round thru the semifinals will be played at Bernalillo High School, Santa Ana Star Center in Rio Rancho and campus of University of New Mexico (UNM) in Albuquerque.

The Grants Pirates (19-8) boys upset the Shiprock Chieftains (29-9) during first round action by a score of 65 to 56. The Kirtland Central Broncos (17-12) boys were stunned by the St. Pius Spartans (14-15) 65 to 40 at home. Farmington's Piedra Vista Panthers lost on the road to the Los Alamos Hilltoppers, 89 to 56, and Steve Scott's Bloomfield Bobcats won their first ever state playoff game over the Socorro Warriors, 68 to 66.

The Shiprock Lady Chieftains (22-7) held off the Taos Lady Tigers (10-19) with a score of 47-30, while the Kirtland Central Lady Broncos (23-2) soundly defeated the Santa Teresa Lady Desert Warriors (11-18) 68 to 29. The Navajo Prep Lady Eagles (17-11) moved into second round action with a 82 to 49 win over the Mesa Vista Lady Trojans. Finally, the Piedra Vista Lady Panthers were 36 to 21 winners over the Deming Lady Wildcats.

The No. 7 seeded Shiprock Chieftains and the No. 10 seeded Grants Pirates played the opening quarter evenly with the game tied three times as the period ended. The Pirates clung to a one point lead, 17 to 16.

Grants exploded in the second quarter with scoring from the perimeter with four treys, only to be duplicated by the Chieftains' Nick Begay, Jeffrey Tsosie, Verlyn Begay and Wesley Ben, who each hit a three ball. The Pirates eventually pulled away, outscoring the Chieftains 22 to 13 and held a 38 to 30 halftime lead.

Shiprock staged a comeback, but still trailed 50 to 43 as the third quarter ended. With the outcome undecided and the Chieftains' season on the line, the Chieftains furiously fought back, but the Pirates stood their ground, hitting 8 of 10 from the charity and six points from the inside the paint, which led to a disheartening end to a well played season for the Chieftains.

"I am proud of the boys," said Chieftains Coach Cliff Johns, who played for the University of Arizona Wildcats and the Winslow Bulldogs. "They gave it their best effort."

The Chieftains were led by Colby Nahkai and Verlyn Begay with 13 points each followed by Nicholas Begaye with 10 points. Brandon Rael had a game high 21 points for the Pirates, who advance to second round match up with Espanola Valley.

The New Mexico state Number 2 ranked Shiprock Lady Chieftains, who were seeded second for the state tournament, didn't play well according to coach Brady Rivers. "We didn't play well offensively, but we were consistent on defense. At this time of the season, if you're winning, that's a good thing."

The Lady Chieftains had a slow start with a single digit first quarter, but led 7 to 5. Shiprock turned up the heat in the second frame, and played Chieftain basketball with full court pressure and scoring off turnovers. Mishauna Todacheenie scored eight of her game high 15 points as the Lady Chieftains went on an early 12 to 5 run to lead 19 to seven. The Lady Tigers countered with a 6 to 4 mini run and trailed 23 to 13 at the half.

Shiprock scored nine points while holding Taos to eight points and held a 12 point advantage at the end of the third period, 32 to 30. Then, the Lady Tigers staged a scoring spurt with a 10 to 4 run and cut the lead to six points at 36 to 30. The Tiger's run was halted when Kalen Henderson hit a trey, which led to a Chieftain's 11 point run. During this run, Shiprock hit on six of ten free throws to assure a trip to "The Pit" in Albuquerque for second round action.

The Lady Chieftains play the Piedra Vista Lady Panthers on Tuesday night, however, the results were not available at press time.