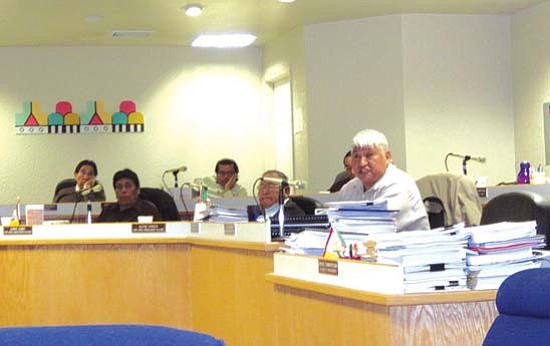 <i>Rosanda Suetopka Thayer/NHO</i><br> Dale Sinquah (right), one of eight&#160;council members asked to step down from his Tribal Council position,&#160;turned to a room full of Hopi community members and refused to step down.

KYKOTSMOVI, Ariz. - Last week, Hopi Tribal Chairman LeRoy Shingoitewa formally requested that the appointed Tribal Council representatives from the villages of Mishongnovi and First Mesa step down from their council seats at the request of their respective village membership. He was strongly supported by Vice Chairman Herman Honanie.

Shingoitewa opened the second quarter meeting of the Hopi Tribal Council by acknowledging the "final opinion" from the Hopi Appellate Court and with letters sent from Sichomovi, Tewa and Mishongnovi villages. Shingoitewa was very specific that neither he, Honanie or the Hopi Tribal Council had made this ruling, but that the Hopi Appellate Court had, and that as Chairman, he fully intended to comply with both the ruling and the Hopi Constitution.

Shingoitewa stated to the embattled Council members, "I ask you to go back to your villages. It is not up to the council to make decisions for the villages. It has to be the village, as a whole, to decide. It is up to the representatives of those villages to ... work this out."

In all, Shingoitewa asked the Council representatives five separate times to step down, but all refused to do so. After the final request, Dale Sinquah, representing First Mesa, turned to face Hopi community members in attendance and stated, "I will not step down."

He later added, "Right now, you have the court ruling and you are under a lot of public pressure to do what the grassroots community is saying you should do. But at some point, [these] the same people are going to be against you, too, for something ..."

The representatives who were asked to step down refused to comply, which prompted the Chairman to call a recess until March 22, stating, "If [you] do not bring [in] some type of documentation that [you] have met with their respective villages and gotten their formal endorsement to serve as their representative ..., then I will have no choice but to not recognize [you] as part of the Council. You as a Council last year, established the new appellate court and agreed to abide by whatever final decision would come from it regarding this issue."

Shingoitewa then suspended the eight Council members, stating that they were no longer authorized to travel or act in the capacity of a Tribal Council representative or represent the Hopi Tribe in any manner until further notice.

In refusing to step down, several representatives stated that this was an unwarranted change in government. Sinquah stated, "Government in the hands of the grassroots people is not good."

Felter herself has been under scrutiny for some time, as she does not possess any executive authority to call a special meeting according to the Hopi Constitution. She was accused of insubordination and neglect of duty by several Council members in a letter written to the Hopi Council on March 4. The letter demanded Felter's immediate removal from her position effective at 5 p.m. on March 24.

A public meeting was held March 4 at the Tewa Administrative building in Polacca so that Chairman Shingoitewa could share materials and information on what the Appellate Court's final ruling means to the local community, what authorities it supports in the villages and also to update Hopi and Tewa tribal members on what is currently happening at the Hopi Council executive level.

"It's unfortunate that those who are illegally sitting on council were not removed automatically on March 1. The villages have already spoken - they held their village elections, they argued and won their case in Hopi court. What more will villages and the Hopi people have to do? The tribal constitution is clear. The kikmongwit do not have authority to appoint [council representatives] and the tribe's highest court just validated that provision. As tribal leaders, we ... have to abide by the Hopi Constitution and follow the Rule of Law," Nuvamsa said.

Sam Shingoitewa Jr., staff member and policy analyst for Chairman Shingoitewa stated, "I am hoping that the Hopi and Tewa community understands what we are trying to do right now ... to stabilize our tribal government. I encourage each village to work on their own village constitution and by-laws ... Even though this ... political turmoil has been very stressful for our tribal members, we should see this as a really good opportunity for change [and] a chance for us to make some drastic improvements for our own Hopi people and villages."