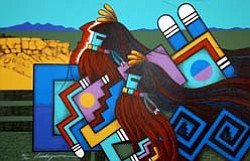 FLAGSTAFF, Ariz. - The Museum of Northern Arizona is proud to announce a new exhibit entitled, Walking in Harmony: The Life and Work of Lomawywesa, Michael Kabotie, which opens Saturday, March 13. Kabotie (1942-2009) was a longtime friend and collaborator at MNA. This exhibit of Kabotie's innovative, reflective, and spiritual paintings, prints, jewelry, and poetry will run through Sept. 12.

Kabotie's friend and exhibit curator Dr. Kelley Hays-Gilpin said, "Artist, poet, 'mythical archaeologist,' ritual clown, and trickster - Michael Kabotie explored the journeys of humankind by playfully meshing his own Hopi traditions with myth and imagery from around the world."

MNA Director Robert Breunig, another close Kabotie friend added, "Mike's Hopi name, Lomawywesa (LOH-ma-wy-wee-sah) means 'walking in harmony.' We thought that was a perfect name for the exhibit, as the struggle to find ... harmony was the central theme of his life."

On public display for the first time will be two large triptychs Kabotie and Delbridge Honanie painted together in 2002 when they were artists-in-residence at MNA. Pottery Mound: Germination, and Pottery Mound: The Meeting of the Agricultural and Hunter-Warrior Cultures are based on ancient kiva murals from an ancestral Pueblo site near Albuquerque, N.M.

Kabotie enjoyed bringing together his own Hopi traditions with those of other world cultures, and often collaborated with archaeologists and artists to explore the synergistic connections among spiritual archetypes far flung in time and space. The exhibit will include two pieces from Kabotie's Hopi/Celtic Connections series, in which he and Jean-Jacques Dauben painted intertwining serpents from Hopi and European traditions.

The exhibit will also include some of the finest examples of Kabotie's silver and gold jewelry, as well as his tools and sketches. In his jewelry he used the same dynamic motion and symbolism as he did in his paintings, with the added dimension of layers of metal forged together.

Walking in Harmony has a personal focus. It is not just about his art, but also about this philosophical artist, his family, and his Hopi community. The exhibit includes watercolor paintings of katsinas, buffalo dancers, and Hopi basket dancers by Mike's father, Fred Kabotie, who taught painting and silversmithing in Hopi schools and whose mural paintings can be viewed at the Watchtower and Bright Angel Lodge at the Grand Canyon.

Fred Kabotie is one of the artists responsible for developing the trademark overlay methods in the 1940s and 1950s that are used today by many Hopi jewelers. Michael used these same overlay techniques, however his style and designs were distinctly his own. His mother, Alice was an accomplished basket weaver and two woven plaques by her will be shown.

Michael's third son, Ed Kabotie, an artist and musician said, "Although my father is best known for his paintings and silverwork, I believe that his greatest legacy is the healing journey that he both walked and challenged others to walk. He was very open about his own trip to the 'dark side.' In time, he chose to walk a higher road and he truly lived up to his Hopi name ... in the later years of his life."

Michael was in the process of designing a mural that would trace the story of a Hopi sacred clown's journey to discover how to live in the world, making mistakes along the way, coming to terms with the ego, and finally coming to know the beautiful world of the katsinas or spirit beings, who come as rain to Hopiland every year before returning home to the San Francisco Peaks.

He connected the journey of the clowns with his own struggles. His artwork explores the depths of dysfunction and despair, the dark unhealed side of humanity, as well as the healing that can be achieved through humility and spirituality.

"Dad came full circle in his life," says Paul Kabotie, Michael's oldest son and the owner of Native Art Network. "When he left this world, he had become the man he always aspired to be. He leaves a legacy that we, his children, will strive to perpetuate and live up to."

Kabotie was born on the Hopi Reservation and grew up in the village of Shungopavi. He graduated from Haskell Indian School in Lawrence, Kan. In his junior year of school, he was invited to spend the summer at the Southwest Indian Art Project at the University of Arizona with artists Fritz Scholder, Helen Hardin, Charles Loloma, and Joe Hererra (who became his lifelong friend and primary artist mentor).

He studied engineering at the University of Arizona and after dropping out of college, he had his first one-man show at the Heard Museum and his work made the cover of Arizona Highways magazine. In 1967 he underwent his Hopi manhood initiation into the Wuwutsim Society and was given his Hopi name, Lomawywesa or Walking in Harmony.

Michael was a founding member of Artist Hopid, a group of five painters who experimented in fresh interpretations of traditional Hopi art forms and worked together for five years. His paintings were contemporary interpretations, reflective of his Hopi mentors, pre-European kiva mural painters from the ancient village of Awatovi, and the Sikyatki pottery painters.

His book of poetry, Migration Tears: Poems about Transitions, was published in 1987 by UCLA. He lectured across the U.S., in New Zealand, Germany, and Switzerland, and taught Hopi overlay techniques at the Idyllwild Arts Foundation in Idyllwild, Calif. for over 13 years. His works are in museum collections around the world, from MNA's Fine Arts Collection to the Heard Museum in Phoenix, the British Museum of Mankind in London, and the Gallery Calumet-Neuzzinger in Heidelburg.