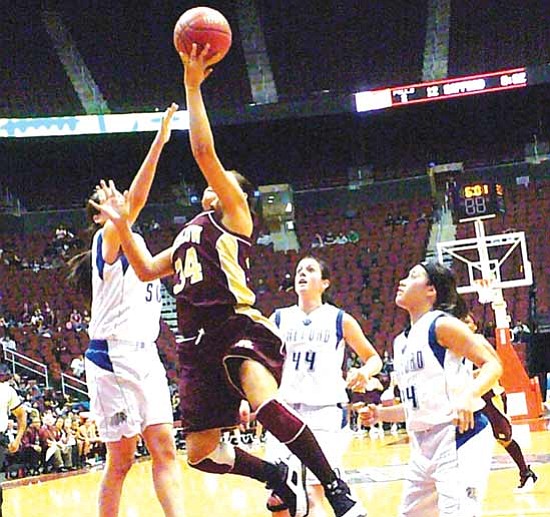 <i>Anton Wero/NHO</i><br> Winslow's Paige Shirley (34) goes for a lay in against Safford's Bea Villalba (50). Winslow defeated Safford by a score of 44 to 41 during the Arizona State Class 3A semifinal game at the Jobing.com Arena in Glendale.

GLENDALE, Ariz. - The Window Rock Lady Scouts and Winslow Lady Bulldogs won their Arizona State 3A Conference semi-final games on Friday to assure that the state champion will be member of the 3A North Region.

Window Rock led the Snowflake Lady Lobos 16-11 after the first quarter and 27-18 at the half. The margin was 42-31 after three quarters and was successfully protected in the final period.

Violet Wood paced the Window Rock attack with 16 points. Coralie Clark and Ashley Mitchell were also in double figures with 11 points each for the Lady Scouts. Brittany Titus led Snowflake with 16 points.

Reagan Godfrey and Jessica Johnson each scored eight points for the Lady Lobos.

Winslow needed a crucial late steal by Gabby Stacy and clutch free throws by Kourtney Shirley to secure the 44-41 victory over Safford in the battle of Lady Bulldogs.

Winslow led 11-7 after the first period but the game was tied at 19-19 at the half and Safford led 33-32 after three quarters. Winslow had a one point lead in the close contest when the crucial steal and free throws sealed the victory.