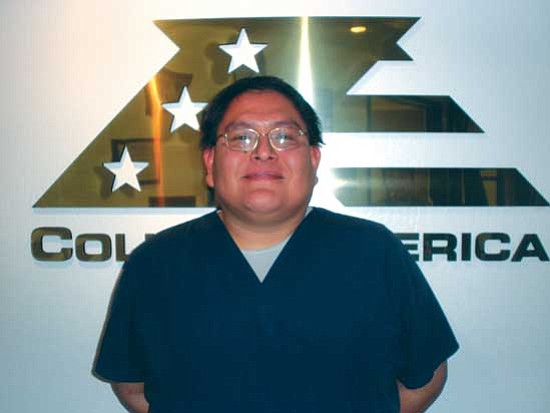 FLAGSTAFF, Ariz. - Recently, Lee Sakiestewa of Tuba City - salutatorian of his graduating class of 2009 - sat down to talk about his struggles and successes during his journey through college.

Many students face obstacles and challenges while juggling family, work and school, and Sakiestewa was no different. Some students overcome even bigger obstacles such as difficulties with transportation, family tragedies, and economic hardships. Once in a while, a student is able to overcome all that is thrown in his/her path. They exceed in their studies, rise to the top as a leader, mentor fellow students, and provide inspiration to all, including the faculty and staff who watch this journey unfold.

Sakiestewa took the time to share personal details of his struggles and triumphs in the hope that he could encourage others who face difficulty to not give up. When Lee was asked what some of his challenges were while going to college, he said his biggest was the commute he made for 20 months from his home in Tuba City to Flagstaff. He explained that, like many families, several people share one vehicle and it would have created a huge hardship on his family had he taken their only car to Flagstaff.

Sakiestewa formed friendships with several other students who commuted between Tuba City and Flagstaff, which led to a very successful carpooling arrangement. He described the situation where he and two fellow students were thrown together out of circumstance into this carpool situation and how it then evolved into study partnerships and eventually close friendships that he had no doubt would be life-long. He said that when life issues would surface for any of them, they would end up sharing with each other as they rode back and forth. They helped each other with carpooling, as well as through life traumas and triumphs.

Like many students, Sakiestewa was very close to his family. However, when five family members died while he was in college, it created an overwhelming hurdle and motivator to not take life or time for granted.

Sakiestewa reflected back on the experience and finally said with deep emotion, "I had promised several of the people that had passed away that I was going to go back to school and finish." He explained that after his loss - one of them being one of his closest cousins - he felt more than ever that he needed to finish his degree, and to do a good job while accomplishing that goal. He said, "There were times I'd be so tired and want to just leave an assignment unfinished but I'd end up not being able to sleep. It would nag and nag at me until I'd finally just do it."

He concluded, "Your work is a reflection on you, and if you don't do a good job, what does that say about you?"

He explained that another big motivator was to prove to his two youngest brothers, his mom, and step-dad that he could do it. Sakiestewa eventually graduated from the Medical Specialties program at CollegeAmerica with a 3.99 grade point average, earned his Associate of Occupational Studies degree, and was awarded the title of salutatorian.

Sakiestewa shared some advice he'd give to new students embarking on their college career, saying, "Making friends with other students, and communicating openly with them, and your instructors makes a big difference." He said having that forum to share your struggles with them (both in and out of school) made it so much easier to get through the difficult times. He said communicating with your instructors and other staff was important also, because they are all there to help the student succeed.

Other advice he shared was "to be on time and prepared for class" because it reflects on you as a person and as a student. Sakiestewa always had a good work ethic. This has carried over into his professional career as a Pharmacy Technician at the Guidance Center here in Flagstaff where his externship led to a full-time job. He said for him, his college experience "taught me the basic overall knowledge to get into the health care field."

Sakiestewa concluded the conversation by describing his most rewarding college experience as, "meeting people and forming long-lasting relationships."