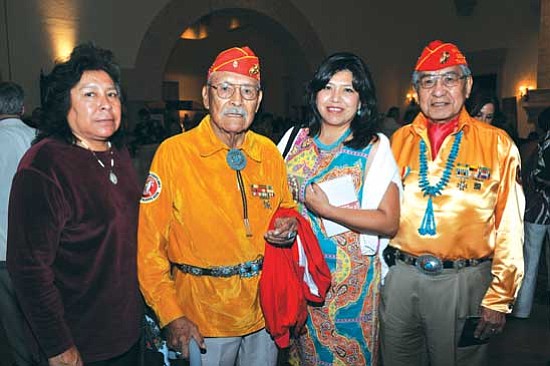 These awards reflect the Office Depot Foundation's mission - Listen Learn Care® - by honoring individuals who have been exceptionally creative and innovative in following their dreams and in helping others to realize their goals and aspirations.

The Navajo Code Talkers, who served in all six Marine divisions from 1942-1945, have been credited with saving countless lives and hastening the end of World War II. Their primary job was to talk and transmit vital information in their native dialect, which was understood by fewer than 30 non-Navajos at the time. It has been said that if it was not for the Navajo Code Talkers, the Marines would never have taken Iwo Jima.

Accepting the Listen Learn Care Awards on behalf of the Navajo Code Talkers were:

• Frank Chee Willetto, who served at Saipan and Okinawa. He was a Navajo Nation Councilman for 15 years, served as Navajo Nation vice president and is now on the Standing Committee of the Navajo Code Talkers Association.

• Peter MacDonald Sr., who served in the South Pacific, Guam and North China. A former Chairman of the Navajo Nation, he was re-elected to the position four times. He serves on the Standing Committee of the Navajo Code Talkers Association

• Samuel Tso, who served on Iwo Jima. He is the current vice president of the Navajo Code Talker Association.

"These awards recognize not only what the recipients have accomplished, but also their vision, their dedication and their persistence," said Office Depot Foundation President Mary Wong. "We are exceptionally pleased to honor the Navajo Code Talkers not only for the heroic role they played in World War II, but also for the untold contributions they have made since that time to the Navajo Nation and to our country as a whole."

MacDonald noted, "This prestigious award and honor bestowed on the Navajo Code Talkers is greatly appreciated. We will long remember this recognition from the Office Depot Foundation, which we greatly respect for its efforts to care and listen to those who are less fortunate. We especially thank Mary Wong and Office Depot, whose compassion for others is realized throughout the country."

The Listen Learn Care Awards were presented during the Foundation's recent "Weekend in Boca" Civil Society Leadership Symposium, which attracted more than 125 representatives of non-profit organizations, government and businesses to Boca Raton for sessions focused on helping non-profits enhance the impact they make in their communities.

To learn more about the Office Depot Foundation and its initiatives, visit www.officedepotfoundation.org.