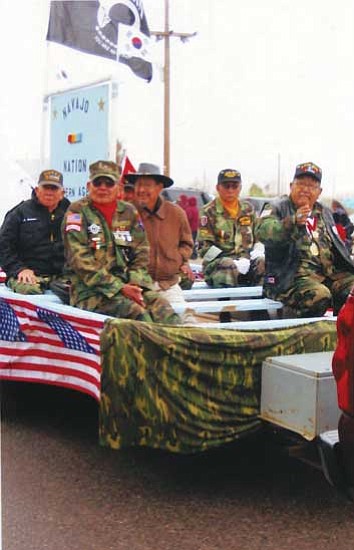 SACATON, Ariz. - "This year's commemoration of the Iwo Jima flag raising, by the Gila River Indian Community, was bigger and better than those in the past," said Manuel Hernandez, Commander of the Ira H. Hayes American Legion Post No. 84, that sponsors the annual event.

"Our commemoration ceremonies have been changing over the years since we started in the early 1980s. They seem to be evolving into a tribute to the military service of all veterans in addition to honoring the memory of our local hero, Ira Hayes," Hernandez added.

This year the parade contained over 140 entries.

Bill Velie, who represents most veterans groups in northern Arizona, drove down from Flagstaff to participate in the parade with his Hummer and a trailer covered with flying flags. His Flags of Freedom Wave is a display of flags that honors the service of all veterans past and present. Velie participates in about 11 parades each year to promote patriotism and respect for the American flag. This was his third appearance in the Sacaton parade.

A Marine Corps unit from the air station in Yuma provided a flyover with three Harrier jets. Members of the Gila River community conducted wreath laying ceremonies at the Ira Hayes Memorial, the Women's Veterans Monument, the Purple Heart Monument and the Matthew B. Juan Monument.

A powwow and gourd dance were held in the Sacaton Rodeo Grounds. Marcus Sekayouma, who coordinated the dances for the occasion, said that gourd dances are used by Native Americans from Oklahoma to honor their warriors and provide healing for unpleasant memories of war.

Ira Hamilton Hayes, an Akimel O'odham (Pima Native American) was born in Sacaton on Jan. 12, l923. He attended Phoenix Indian School and enrolled in the U.S. Marine Corps in l942 when he was 19 years of age. In l945 he took part in the Battle of Iwo Jima, which many consider to be the turning point for World War II in the Pacific.

The island of Iwo Jima, with its critical airfields, was a heavily fortified Japanese stronghold. Its airfields were only 650 miles from Tokyo. Earlier bombardment by Navy battleships had no impact.

More than 100,000 men from all branches of our Armed Forces took part in the invasion of this small, eight square mile island, that consisted of nothing more than volcanic ash. Its underground hospitals and supply rooms were protected with artillery and antiaircraft batteries, and machine gun and mortar bunkers. The island was considered impregnable until the Marines had landed.

Henderson said that according to a database maintained by his American Legion Post 35 members of the Navajo Nation were involved in the invasion. Henderson recalled that he had heard it said that the Marines could not have taken Iwo Jima had it not been for the support provided by the Navajo Code Talkers.

Early in the battle, Ira Hayes with four other Marines and their Navy corpsman raised the stars and stripes on a pile of volcanic ash called Mount Suribachi to symbolize their control over the Japanese stronghold. Their efforts were captured in a one of the most famous photos in history by Joe Rosenthal, a photographer for the Associated Press.

The men, including Ira Hayes, became famous once they were identified in this photo. They were was ordered to return to the United States by President Truman to sell war bonds and uplift the moral of a war weary nation.

Ira Hayes never considered himself a hero and often said that the real heroes were "my good buddies" who had made the supreme sacrifice taking the island. He had difficulty understanding all of the hype and hoopla generated by the photograph and was often overcome by guilt when he thought of those who were forever left behind.

Ira Hayes once told Joe Rosenthal that he wished the picture had never been taken. Rosenthal replied, "I only took a picture. You Marines took the island."

Ira Hayes' story an example of how "brave warriors" can suffer from the horrors of war long after the battles are over. In a way, I suppose that this is what our commemoration is all about," Hernandez said. "We want to provide an opportunity for veterans to meet and mingle with each other periodically and build support systems that can get them through troubled times."