'The Good, the Bad and the Beautiful' - Pivot Rock Canyon Trail 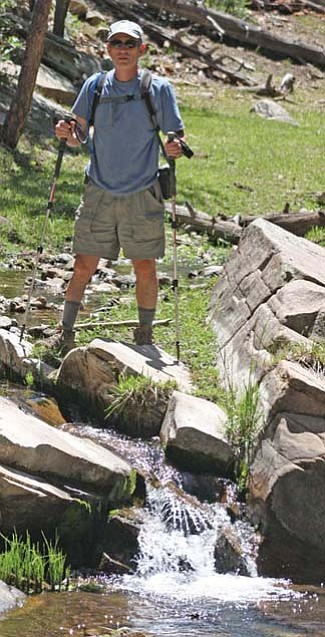 Reporters often go out to get one story and in the course of research find a better story. This can also be the case with hikers. Hiking buddy Rich Karlin and myself set out to hike the Pivot Rock Canyon Trail and we started on it.

Descriptions of the trail talk about a rock staircase a quarter-mile in where hikers are supposed to cross over. At the quarter-mile mark, we didn't see anything so we kept going. A short while later we passed something that could have been the staircase, but we kept going on the trail we were on.

The trail we were on climbed uphill to the right and then back down to the streambed. After that we just followed the streambed and the trail.

Hikers spoiled with signs will not be happy on either of these trails because there are no signs except for those that tell motorized vehicles to stay out.

Dave Engelman, a hiker with the Payson Packers Hiking Club, said the trail we were on was probably the Pivot Canyon Springs Trail, but he added that many of the trails here have no name or number.

Phoenix Magazine describes Pivot Rock Canyon as Arizona's "rainforest" because of its "moisture-laden vegetation." Because of missing the turnoff at the quarter-mile mark, we didn't get to see that "rainforest" except for noting, on our way out, the beginning of a side canyon that looked a tad like a rainforest.

The Pivot Rock Canyon drainage runs year-round due to ample moisture from the snowmelt and summer storms. The long-running stream brings an abundance of vegetation. There were yellow monkey flowers and some other flowers, but not in abundance. Yet, there was an abundance of butterflies and birds including robins, flickers and woodpeckers.

By following the creek, we eventually ran into an old cabin or stable. Hike descriptions say there are two old cabins in this area.

At the 4.5 mile mark, we ran into Forest Road 142, a good forest service road with no vehicles anywhere in sight. Walking directly across the road, we ran into a bit of meadow and another stream. Engelman said this stream is part of the West Clear Creek drainage.

The good part about not going on the initially planned hike is that we added mileage. The Pivot Rock Canyon hike is three miles and with some additional hiking in the side canyons hikers will still get a maximum of 6.5 miles. By just following the stream we came out at 9.8 miles.

Engelman said Pivot Rock Canyon was the first hike he went on 23 years ago. He goes back periodically and found a cave in the area. He was able to get into the cave on his hands and knees before being able to stand up. With use of a flashlight, he found a pool of water in the cave. There is also a tunnel in the cave.