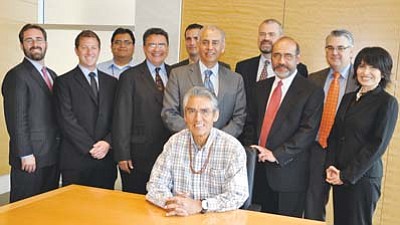 The loan is considered the first major institutional financing deal governed exclusively by tribal laws and subject to tribal jurisdiction, in full recognition of the Navajo Nation's sovereignty.

"We worked with KeyBank and there's a lot of respect there for the Navajo Nation ..." President Shirley said. "They're willing to work with us, with our laws and our courts ..." He added this deal means that the Navajo Nation can now begin to build detention facilities, new courts and public safety buildings.

"This has been a long time coming. We've talked about it for years, really," President Shirley said. "We can begin [bringing] down the crime rate, as far as building our detention facilities are concerned, and we can start doing it better with our judicial processes [and] court buildings."

Mike Lettig, KeyBank Native American Financial Services national executive, said the transaction is unique in that it integrates all of the legal infrastructure of a tribe.

"It recognizes the sovereignty of one of the strongest Indian tribes in the country, and it creates an opportunity to provide a solution in terms of financing that really recognizes the sophistication of their legal infrastructure, their laws, and it allows an organization like KeyBank to participate in a solution," he said.

KeyBank is a subsidiary of the Cleveland, Ohio-based, KeyCorp, one of the nation's largest bank-based financial services companies with assets of approximately $95 billion. Key companies provide investment management, retail and commercial banking, consumer finance, and investment banking products and services to individuals and companies throughout the United States and internationally.

Lettig said KeyBank took the time to conduct research and determined the Navajo legal system is strong and stable, and is confident there is no downside for the bank.

"The Navajo legal system is sophisticated and the tribe is in excellent financial shape," he said. "This is a great opportunity for KeyBank to establish the kind of strong, ongoing relationships we are seeking in Indian Country. Without taking any undue risk, we can help the tribe upgrade needed infrastructure. This deal is backed by the full faith and credit of the Navajo Nation - and we are confident of the strength of that position."

Navajo Nation Controller Mark Grant worked with KeyBank to negotiate the terms of the term loan.

"This means that we can start building jails," he said. "This set a new playing field for the Nation." He added the Navajo Nation is thankful to KeyBank for taking the time to familiarize itself with Navajo laws, and is excited to move forward.

"The Nation is particularly thankful to KeyBank for providing key capital for one of the Nation's largest government facilities projects," he said. "The funds from the term loan will allow the Nation to move forward expeditiously."

The $60 million loan means the Navajo Nation can take advantage of tax-exempt financing and participate in the Build America Bond program, part of last year's American Recovery and Reinvestment Act.