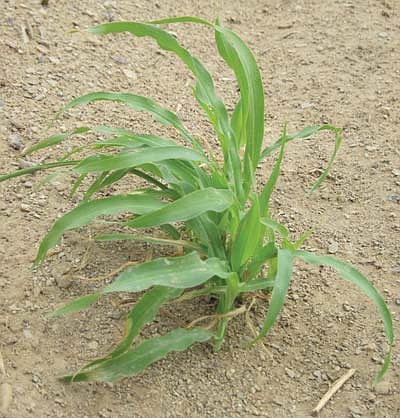 <i>Rosanda Suetopka Thayer/NHO</i><br> Individual corn plants are gently nurtured and given great care by Hopis utilizing the dry-farming method. Each plant must be precisely planted to a certain width and depth apart from each other to have the greatest opportunity to yield a maximum crop at the end of harvest season.

HOPI RESERVATION, Ariz. - In northern Arizona, where the average yearly rainfall is about 12 inches or less, the Hopi people have managed to endure and thrive by utilizing a tried and true method of farming that is totally dependent on natural precipitation.

This dry farming method is based on faith, keen observation, Hopi science methods and what the ancestors say is a "heart full of prayer."

There is a special reverence for farmers who practice dry farming traditions because there isn't much rain or moisture to sustain these special types of crops. But by using their own research of soil analysis, natural science with wide spacing and certain proven depths of planting, Hopis are able to yield crops of corn, squash, beans, melons, peaches and sunflowers in the dry washes and valleys at the Hopi Reservation.

The locations for planting at the Hopi mesas are in the field areas below the mesa tops, in the washes and the small valleys that separate the plateaus.

Farming has always been a focus of Hopi culture. In the past 40 years, there has been renewed interest in raising cattle or sheep but farming has always been at the core of Hopi life. It is a big part of Hopi tradition and custom and is a big part of what Hopis believe is their "spiritual covenant." Agricultural teachings are a part of what was given to Hopis by their creator for long term survival.

Most of Hopi dry-farming methods are still done exclusively by hand, although nowadays, some tractor preparation is done to prepare the planting areas. Families led by men in the household, plant, weed and nurture their crops until harvest in late September or early October. One of the intergenerational benefits of the entire family helping with farming is that older Hopis share their "secrets" with family members, such as how to keep worms, coyotes and other small bugs off their plants.

Hopi dry farming is truly an "act of faith" that is dependent on hard work, humility, care, and sincere prayer to provide enough rain to nourish their crops.

It's also a lesson in practicality. For the women and young girls, there is the teaching of how to store the crops to preserve them for the next few years in case of famine or drought. They also learn how to store seeds and how to properly stack corn to keep them from getting mildew.

According to Hopi oral tradition, when the world was first created and corn was offered as sustenance, other people in the world choose larger, more colorful ears of corn, while the Hopi chose the shortest blue-eared one.

It is this special blue corn that is used for Hopi traditional cooking, gift giving and food making for special events.

Agriculture at Hopi is a way of life, so significant that it even marks the ceremonial cycle and how cultural activities are structured.

With much trading and verbal exchange with other people, Hopis also learned how to cultivate peaches, watermelons, chilies and wild onions. Hopis today follow dry farming methods, but there are irrigated gardens near some of the villages that are tended by the women that yield tomatoes, chilis, even carrots.

Squash is also grown and is not just for eating. Squash gourds can be made into different household utensils or musical instruments.

Planting season for Hopi farmers begins in April and harvest starts in September and sometimes goes as late as October.

During the 1940s and 1950s, there were organized agricultural harvest fairs held to recognize outstanding harvests or special crops including sunflowers grown by local Hopi farmers. These fairs enabled Hopis to exchange seeds and share methods of upgrading agricultural skills with other Hopis.

Though most Hopi farming areas are not visible from the state roadways, there are some corn and bean fields that can be viewed as one is driving through the reservation area.

These new green plants are prime examples of hard work and Hopi faith.