Out & About: Yeager Canyon hike a must for nature lovers 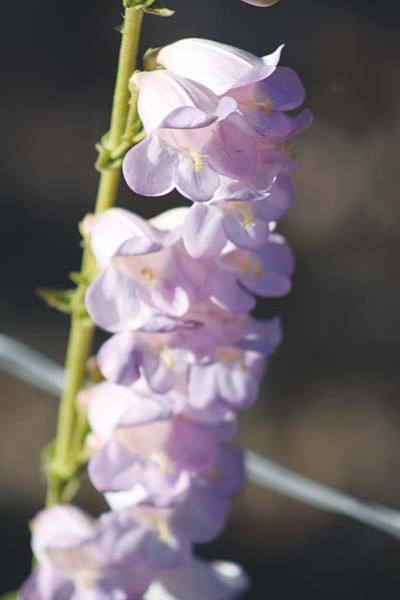 YEAGER CANYON, Ariz. - Colorful flowers dot the Yeager Canyon Trail, but the most beloved to some is the green flower on the Monument Plant that many refer to as deer's ears.

Most people won't guess its name because it doesn't appear to look like deer's ears, but few will say that this flower isn't pretty and unique. Looking through the National Audubon's Society Field Guide to Wildflowers there are few green flowers compared to the pink, purple and red.

On this hike, the pink was the New Mexico Locust, the purple was the Desert Four o'clock and the red was the Indian Paint Brush.

This 6.7 mile loop also offers great scenery of the Bradshaw Mountains, Prescott Valley and some large alligator Juniper trees. Granite Mountain can also be seen off in the distance.

The hike begins on the west side of Mingus Mountain. Take Trailhead No. 28. The first six-tenths of a mile on this trail parallels the highway and seems like a walk in the park. But then the climb begins going 850 feet upward during the next mile.

Just when the sweat starts to build, the hikers reach the overlook. It almost looks like a fort overlook and it offers that great view of the mountains and valleys. A tad later the trail connects with Yaegar Cabin Trail No. 111.

Most of this hike is in the shade of the juniper, ponderosa pine and pinyon pine, but some is out in the sunny open, so go through these sections quickly and bring enough water. The loop finishes by connecting with Trail No. 533 to the right.

After reaching the overlook, there is a bit more of a climb, but not much. After that it is fairly flat with a few mild ups and downs before heading downhill the rest of the way.

This is a fairly popular trail that can be found in both The Best of Prescott Trails by Pat Ballie and A Guide to Prescott and Central Highlands Trails by Ron Smith, but on this Thursday morning we didn't run into any other hikers.

Getting out - Aspen Creek Trail
Out and about: See Canyon Trail
A river runs through it - Mount Baldy
Griffith Springs: a floral feast for the senses
Shultz Tank a butterfly paradise
Event Calendar