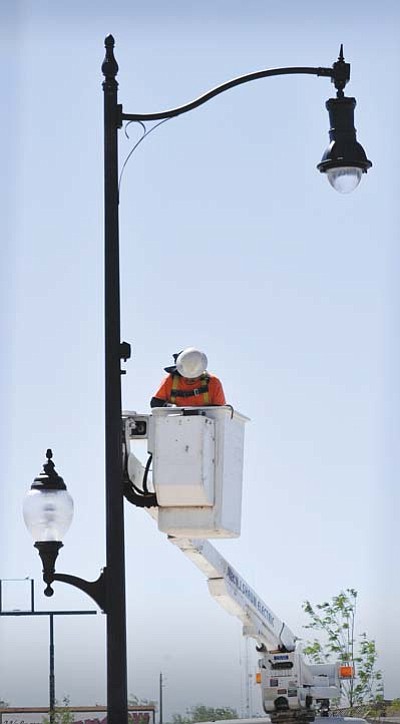 <i>Todd Roth/NHO</i><br /><br /><!-- 1upcrlf2 -->A worker installs new lighting fixtures in downtown Winslow as part of Phase II of the city’s “Renaissance on Route 66” beautification project. The new lights are similar to what was used to illuminate the streets of Winslow about 70 years ago, but will utilize metal halide bulbs, which are more energy efficient.

WINSLOW, Ariz. - As part of Phase II of "Renaissance on Route 66," new light poles were installed on June 17 on Second Street. The lights are reminiscent of what was illuminating downtown Winslow about 70 years ago.

Paul Ferris, Principal City Planner, explained, "The combination light poles, which include both an overhanging arm for traffic lighting and an upright acorn fixture facing toward the sidewalk for pedestrian lighting, were chosen to provide proper illumination for both uses and to accurately duplicate light fixtures that were located on Second and Third streets from the 1930s through the 1950s.

"The fluted poles, expanding bases, and acorn fixtures are similar to those once located on the streets during the 1930s, while the overhanging arms honor the taller fixtures placed by the former Arizona Highway Department (now the Arizona Department of Transportation) during the 1950s to better illuminate the increasing traffic on Route 66 through the downtown area."

Ferris added, "Metal halide bulbs, which are energy efficient, will provide white light approximating the incandescent lighting once used in the original fixtures and are similar to the lighting currently used along the pedestrian path on First Street."

Ferris concluded, "The light poles, along with metal benches, waste receptacles, landscaping, a Route 66 emblem in the intersection of Second Street and Kinsley Avenue, and new sidewalks and safety extensions that are in compliance with the Americans With Disabilities Act, are being installed along Second and Third streets from Williamson Avenue to Berry Avenue in the Renaissance on Route 66, Phase II, project."

Ferris added that Renaissance II is being partially funded by a $750,000 Federal Transportation Enhancement grant and is scheduled to be completed by mid-July 2010.