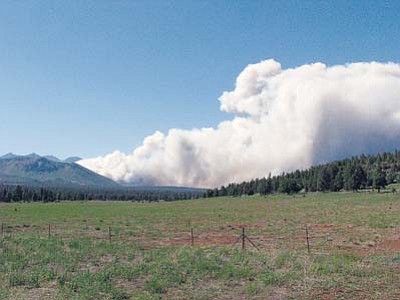 <i>Photo by Lynda Duffy</i><br> A view of the Schultz Fire taken about 4 p.m. Sunday, June 20 on Walnut Canyon Road east of Flagstaff.

FLAGSTAFF, Ariz. - Wildfire officials have reported that the Schultz Fire burning northeast of Flagstaff near Mt. Elden has increased to 8,849 acres with zero containment. Windy conditions are expected to continue through today.

FLAGSTAFF, Ariz. - Two new wildfires in the Flagstaff area over the weekend forced the evacuations of a number of residents and animals housed at the Coconino Humane Association animal shelter and the Second Chance Center for Animals. These fires are in addition to the Eagle Rock Fire, currently burning about 11 miles northeast of Williams on the northeast side Sitgreaves Mountain. As of press time, the Eagle Rock Fire was reported to be at about 3,400 acres and is about 60 percent contained

The Hardy Fire started at approximately 1 p.m. on Saturday afternoon and is located southwest of Herold Ranch Road and Little America Hotel. Residents from the area were evacuated to a Red Cross Shelter located at Mt. Elden Middle School at 3233 North Fourth Street. As of press time, the fire was reported to be about 300 acres with 30 percent containment. Evacuees were allowed to return to their homes on Sunday afternoon. Flagstaff police have arrested a transient from California in connection with this fire.

The Schultz Fire started at approximately 11 am on Sunday and is located west of north Highway 89, east of Flagstaff, and north of Mount Elden. As of press time, the fire was reported to be about 5,000 acres and growing with 0 percent containment.

The Schultz Fire forced the evacuation of 1,044 structures in the Timberline, Fernwood and Wupatki Trails neighborhood as well as the Second Chance Animal Center, which had been utilized for animals evacuated from the Coconino Human Association shelter as a result of the Hardy Fire the previous day. Animals from Second Chance Center were evacuated to Fort Tuthill County Park. Evacuation orders will remain in place until further notice.

The Coconino County Sherriff's office is recommending that individuals who are evacuated ensure they take prescriptions, important paperwork, pets, a change of clothing and water.

Residents can still expect heavy columns of smoke from both the Schultz and the Hardy fires. If you are in the area problems and have not been instructed to evacuate, you are advised to remain indoors or leave the area. Please consult the Coconino County Health Department website at http://www.coconino.az.gov/health.aspx?id=6564 regarding potential hazards dealing with smoke inhalation.

The Salvation Army is reporting that no material donations are needed at this time. However, if individuals are interested in volunteering or providing financial donations, please call United Way of Northern Arizona at (928) 773-9813. Additionally, the Second Chance Center is requesting monetary donations to help with the emergency. Any volunteers who want to assist or people wishing to donate may call (928) 526-5964 for more information. You may also call this number to locate any missing pets. If you need assistance with evacuating animals, call the Coconino Sheriff's office at (928) 774-4523.

Additional information on the fires or evacuation information can be obtained by calling 1-888-679-8393.