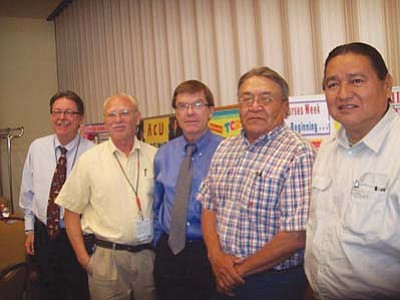 TUBA CITY, Ariz. ­- On June 2, the Tuba City Regional Health Care Corporation (TCRHCC) presented its annual report to the Navajo Nation Health and Social Services Committee (NNHSSC). An update on all areas of corporate operations was given. Of particular note was the implementation of Electronic Health Records (EHRs) from paper records to computer format.

Part of a nationwide initiative, EHRs enable doctors and nurses to easily access patient information on a computer without having to rely on a paper chart to find information. According to June Murray of Clinical Informatics, this system is currently internal, however, it has the potential to be linked to other hospitals. For instance, if a TCRHCC beneficiary is injured in Phoenix, TCRHCC can send records and information for the patient electronically.

"This information is secure because only people with authorized access to the system will be able to view the records," Murray stated.

On the EHR system, the patient's chart will display a picture of the patient as well as the doctor. Security is ensured as each provider will have a unique password and the system tracks who has accessed a patient's records as well as attempts by unauthorized persons who attempt to gain access to the records.

According to TCRHCC CEO Joe Engelken, the annual report to the NNHSSC is like a report to the Health and Human Services at the federal level. The NNHSSC is the overseer of health care services on the Navajo Reservation. A handful of reservation hospitals have federal PL 93-638 (Self-Determination) status, allowing them to be independent of the federal government. TCRHCC has self-determination status until 2020. Starting in 2003, TCRHCC's first three years were a pilot program, but it is now fully operational as a corporation.

Since the hospital is now governed at the local level, TCRHCC has made much progress but Engleken states, "There is a lot of catching up to do."

Engelken points out that 400 jobs have been added in the years of self-determination, but that the next step is to attain Title V status, which establishes permanent self-governance. Presently, the Title V initiative is being presented to the individual chapters in TCRHCC's service area for public input. To date, about 57 percent of the tribes in the U.S. have adopted self-determination.

According to Engelken, once Title V is adopted, TCRHCC will have more autonomy to improve services without obtaining approval from Indian Health Service or the federal government. It would also allow for better assessment of patient needs for funding reallocation.

"Once Title V is implemented," Engelken explained, "We can reallocate some funds where they are needed, for services such as dental care."

According to Chief Medical Officer Dr. Alan Spacone, "Most institutions are concerned with demand. TCRHCC has plenty of demand but not enough services."

Spacone added that he wants to expand services to include oncology and women's health within six months.

In his presentation, Spacone stated, "The heart of the hospital is the nursing department, the backbone is support services, and doctors are the soul." He added that additional professional staff members are being recruited, and TCRHCC has added radiologists, and family practitioners and has plans to recruit a pathologist.

Information Technology Director Shawn Davis made a presentation on the upgrades in technology taking place. He reported that the whole hospital would have a wireless computer network, allowing all departments to share compatible equipment and improve customer service, which is important for the new EHR system. The network infrastructure at TCRHCC has been upgraded to accommodate the new technology.

Overall, TCRHCC has progressive plans in the future. A new mobile medical office building (MMOB) is currently under construction. The three-story 33,000 square foot addition will greatly increase clinic and office space, as well as include a drive-through pharmacy for patient convenience.

Another major accomplishment for TCRHCC is the opening of the Sacred Peaks Health Center in Flagstaff. This facility is now providing outpatient care to Flagstaff area beneficiaries and Native American students at Northern Arizona University.

TCRHCC has additional plans for expansion, but a major impediment is the lack of adequate housing. Acquiring additional land for housing is also a challenge. However, 14 additional modular homes are being planned, pending approval from the BIA and IHS.

During the meeting, three of these new modular units rolled in to town. CEO Engelken could not contain his excitement.

William Charley, Governor of Upper Moenkopi, praised TCRHCC at the meeting for doing a good job. Thomas Walker Jr., NNHSSC chairman, voiced concerns about the next Navajo Nation Council and the transition it will entail. He feels that the next council "will have to look out for the people" so their needs are met.

In closing, Grey Farrell, TCRHCC president, expressed confidence that a smooth transition would be made. His vision is to better serve the healthcare needs of the Navajo, Hopi, Paiute and other tribes with even more specialized care, which is presently only available off the reservation. Farrell also made a point that response time for accidents and injuries in outlying areas needs to be addressed and that Title V status would allow more autonomy and flexibility to achieve these goals and more.