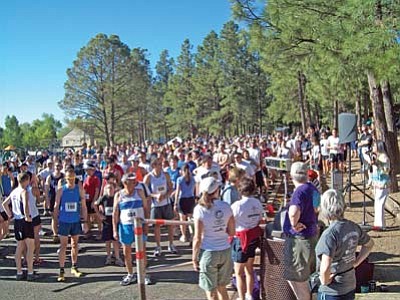 <i>Courtesy photo</i><br> Runners gather at the start of the 27th Annuan Sacred Mountain Prayer Run held in Flagstaff on June 5. The run is part of the Northern Arizona Trail Runners Association (NATRA), a six-series race held in Flagstaff each summer. What makes this run special is the reverence held by all participants for the sacred mountain and for all forms of life.

FLAGSTAFF, Ariz. - A joyous but reverent atmosphere permeated those gathered at Thorpe Park on the morning of June 5 as an estimated 500 runners prepared to tackle the course for the 27th Annual Native Americans for Community Action (NACA) Sacred Mountain Prayer Run. A majority of the runners were Native American. There was also representation from Coconino County, nearby reservations and southern Arizona, while other runners came from as far away as Wisconsin, Colorado, and New Mexico.

Slaughter is of the Tsi'najinni Clan and born for African-American clan. She is a resident of Flagstaff with family ties to Grand Falls and Yuma. She is a junior at NAU majoring in biological medicine with plans to attend medical school in Chicago or Boston. She runs several times each week and is a member of the NAU soccer team.

The prayer stick is made of oak, representing longevity, protection, sacred planting, old age blessing way cane, and a reminder of our foundation and a connection to our relatives - the elements - the animal nation, the flying nation, standing green nation, and the water nation.

The Sacred Mountain Prayer Run is part of the Northern Arizona Trail Runners Association (NATRA), a six-series race held in Flagstaff each summer. What makes this run special is the reverence held for the sacred mountain and all forms of life by all participants - both Native and non-Native - from the opening prayer to the post-race awards ceremonial remarks.

The run started 27 years ago with only 45 runners. It serves as a purification process for both the runner and situation for which the runner is praying since running is more than a tradition for Native American people. As the person runs, he/she experiences a process of individualized emotional, mental, physical and spiritual cleansing.

Native American teachings say that the Creator will look kindly on and bless those who are not lazy, those who will take that extra step in helping him/herself and others. Native American elders say that if a person wants a long, healthy and productive life, one must rise before the sun and run before dawn because this is the most significant time for prayer and blessings. It is the runner's time to ask for blessings when it is believed the Holy Ones are bestowing blessings upon Mother Earth. The Sacred Mountain Prayer Run was begun to honor the fact that the San Francisco Peaks are sacred to all people in many ways.

Dorothy Gishie and Rose Toehe, event co-chairs, shared some comments from some of the runners:

"I have always enjoyed this race, the prayer is what makes this run a special one."

"This is my first time running this race and I really enjoyed it!"

"... I especially enjoy the awards, they are always the best."

"The significance of the run was so powerful that the distance didn't seem to matter, the course may have been tough but I felt rejuvenated."

"This course was just like life, it had its highs and lows and the plateaus."

First Place category winners include: Kyran Brown and Jayde Secody for 15 and under; Michael Russell and Brontel Curley for ages 16-19; Ed Crowley and Michelle Grey for 20-29; William Drexler and Marcy Felt for 30-39; Bo Reed and Angi Christiansen for ages 40-49; John Bogen and Gail Hughes for 50-59; and Ray Lobato and Kathy Dahl for 60+.

First Place category winners are: Jonathan Hall and Jasmine Begay for 15 and under; Jake Yazzie and Allie Leslie for ages 16-19; Kyle Darden and Melissa Hancock for 20-29; Richard Hofstetter and Valerie Tenequer for 30-39; Chris Brady and Sarah Hendricks for 40-49; George Koch and Maureen McGee 50-59; Larry Hobbs and Linda Vernier 60-69.