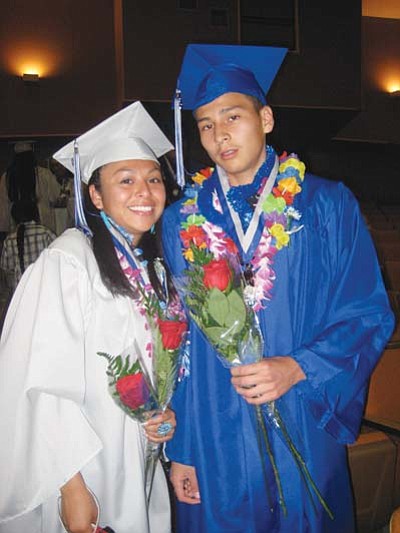 <i>Stan Bindell/NHO</i><br> Hopi High graduates Nicole Cepai and Kevin Tsiniginnie prepare for graduation ceremonies with flowers on May 27. A total of 115 seniors graduated.

POLACCA, Ariz. - Brannon Sidney, president of the Hopi High School Student Council, kicked off the graduation ceremony by talking about the milestones the class made this past school year.

"We made it," he told his classmates.

The crowd responded with applause as 115 students graduated May 27 at Bruins football stadium. Approximately 3,000 attended the event.

Sidney noted that Hopi Chairman LeRoy Shingoitewa, Hopi Vice Chairman Herman Honani and Navajo Nation President Joe Shirley were at the graduation. He said being honored by those dignitaries was one of many milestones reached by this class.

Sidney said he was proud they made it this far but that it was time to go to the next level. He said the world and community is struggling with issues that will impact the graduates, but they are the next generation of leaders.

Sidney told his classmates that they are the role models for their little brothers and sisters so they should show them love, compassion, respect and support.

"We will make mistakes, but we will get up and move forward," he said.

Sidney urged his classmates to return to the reservation with their dreams fulfilled, so they can help others.

Valedictorian Samantha "Sam" Clah told her classmates that their hard work had paid off.

"All we learned has made us what we are today," she said.

Clah, who was known for her rebounding on the Lady Bruins basketball team, thanked her coaches, teachers and her mom for helping her get to this point.

Shingoitewa presented Clah with the valedictorian award, including a computer from the school.

Salutatorian LeAnna "Lele" Leyva said the graduation proved that the students weren't dumb. She urged students to finish their education and spoke of a friend who told her that she needed to leave the reservation in order to get a good education.

Leyva, who won awards in broadcast radio and journalism, thanked her mother and her brother Evan for helping her.

"Don't reach for the stars, but the whole galaxy," she said.

Shingoitewa praised Clah and Leyva for achieving the ranking of first and second in their class.

"That's something not too many achieve on or off the reservation," he said.

Shingoitewa said he was happy to honor all of the graduates.

"Bring honor, not just to yourselves, but to your family and your tribe," he said.

Shingoitewa told the graduates to only take the good from the white man's world. He said students should honor their fathers, mothers, brothers, sisters and anybody else who helped them toward their diploma.

"We're giving you a blessing to use, but only if your willing to use it," he said.

"If you make a mistake, I don't want to hear you say 'He made me do it.' You have choices," he said.

Shirley told the graduates that their hard work paid off. He presented the salutatorian award, including a computer from the school, to Leyva.

Shirley told the graduates that they should go as far as they can. He urged them to work on their independence. "Then come back because we need all your help," he said.

Coach Baker advised students to use both worlds - meaning their Hopi culture, but white man's education - to make themselves stronger.

Baker, who has led the Hopi High boys cross country team to a state and national record 20 straight state championships, said the requirements of reading, writing and math remain the same.

Baker told the students to believe in themselves.

Baker said the key is repeating positive words over and over. He told the students that if they can conceive it that they can achieve it. He asked the students if they have prepared for the future.

"Are you prepared to win? I'm not just talking about games, but life," he said.

That is why he works with his teams to make sure they have a vision and goals to have a sense of direction. He also urges his athletes to put their goals down in writing and put it in a place where they can see it on a daily basis.

He said youth should think about where they will be in five years and ten years.

Baker also told the graduates to find mentors who would be willing to help them. He said he had many mentors who helped him with his goals.

"Now, it's your turn to be a mentor," as he advised the graduates to help their younger brothers, sisters and community members.

Baker urged the graduates to make sacrifices saying he missed time with friends and family, and his culture, so that he could succeed in order to come back to help his people.

He told the graduates that they should be passionate about their jobs so they wake up every morning wanting to go to work. He added that this is much more likely if they earn a college degree. He said he found a job he loves because he earned a teaching degree.

Hopi High Principal Glenn Gilman called this graduating class the most energetic of the eight classes since he has been principal.

• This class made Adequate Yearly Progress in reading, writing and math for five straight years;

• The school was reaccredited for another five years;

• The boys cross country team won their 20th straight state championship, which is both a state and national record; and,

• The students showed incredible spirit in taking on programs where they learned life skills.