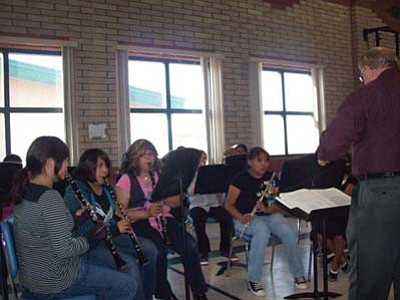 TUBA CITY, Ariz. - On May 19 the Tuba City Junior High band presented the final performance of the year. Under the direction of Morris Nesmith, the band's performance included the guitar classes.

Nesmith has been teaching band since 2003. When he first arrived the band was in disarray. In the 1990s, the band did not exist. He literally had to start from scratch by putting together instruments that were handed down from the high school band program. Within a few years he was able to turn the band program around and they were playing festivals in California. They placed third in competitions and played at different festivals in Arizona. Some students even memorized the music.

Nesmith is proud of the fact that his band plays high school level music and learns from an advanced band book. He states he has a very talented group and some fifth and sixth graders are highly advanced in guitar and band. He encourages the pursuit of music because some colleges will offer music scholarships for at least half tuition. He feels band is strength for the kids.

With budget cuts, the music program is in jeopardy, but Nesmith is hopeful that the band program will stay intact to help students develop and continue learning a valuable skill.