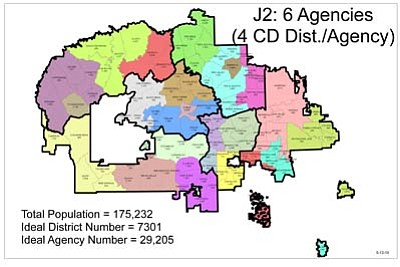 Last Friday, the Navajo Nation Supreme Court ordered that the Navajo Board of Election Supervisors (NBOES) certify the results of the Dec. 15, 2009 special election in which Navajo voters supported reducing the council to 24 delegates and authorized a Presidential line item veto for spending legislation.

Because of delays and inaction by the NBOES and the council to develop a reapportionment plan, the court also ordered that President Shirley present a plan to NBOES by June 11, and that NBOES approve it by June 18.

"We find that the events leading up to the special election show that the reapportionment plan that was expressed through the initiative language failed to be timely approved because of inaction by the NBOES, and action and inaction by the council, which has challenged this initiative, or assisted in challenges, at every step, even unlawfully removing the president from his duties at the very moment an alternative plan from the president was due," the court said.

Immediately following the Dec. 15 special election, President Shirley directed staff to prepare redistricting plans for presentation to the public. The plans incorporated various criteria, data and recommendations from the public.

Following a series of meetings held across the Navajo Nation, a final plan to be recommended - named "J2" was completed on May 13.

"I want to share with the Navajo Nation Council and the Board of Election Supervisors that the redistricting has already been worked on and the map has been readied," President Shirley said in a statement last Friday.

Beginning on Thursday, President Shirley has scheduled five agency meetings ¬- and a sixth at the proposed new Southwest Agency in Dilkon - to further familiarize the public with the plan.

The following is a listing of scheduled meetings:

• Thursday, June 3 from 1 to 5 p.m. at the Eastern Agency at the Standing Rock Chapter.

• Thursday, June 3 from 1 to 5 p.m. at the Fort Defiance Agency at Nakai Hall in the Window Rock Fairgrounds (subject to change).

• Friday, June 4 from 9 a.m. to noon at the Northern Agency at the Shiprock Chapter.

• Times and locations for meetings at the Western Agency in Tuba City and the Southwest Agency in Dilkon will be announced.

A news release from Speaker Lawrence T. Morgan's office on Friday reported that the Speaker and council would respect the court's decision.

"We spent too much time disagreeing. The people voted," Morgan said. "It is the people's government and there is nothing wrong with their votes. There are times when the people vote on new initiatives and things change accordingly such as at the chapter level when a new chapter president is selected. There is a new direction, a new vision."

"This is a great day, these decisions determine where and which direction the Navajo Nation goes," Tsosie said. "Our laws have been strengthened. I see faith in my people. They are the ones who voted on this. They are going to lead us in the right way - it is the people who are leading, which is very interesting."

Many Farms Council Delegate Kee Allen Begay said the decisions of the court have to be respected.

"The court made [its] decision and I have to respect it," he said. "I know my chapter voted in favor of the reduction and the line item veto; 2-1 votes on the reduction."

Petitioner Tim Nelson said the high court's decisions are not a loss for the people but a gain.

"The clarification of laws was what I wanted more than anything," Nelson said. "I really don't have a problem whether we have reduced council or increase the council but the idea is we have representation by means of legislative process that we have in place for our people."

"The discrepancies and shortcomings of the law were clarified and now we can move forward," Nelson said. "Those points and issues we had were addressed, granted that some people will still disagree with it. We are now actually ready to move forward."

In its section on the reapportionment plan, the court ordered "the council may not use its power to frustrate the will of the people" since the council "possesses no independent authority to alter or abolish its clear deference to the Navajo people."

The court statement concluded, "Twenty-four delegates shall be seated on January 11, 2011. The NBOES and the (Navajo Election Administration) shall proceed with the 2010 election in accordance with this decision."

With that, the NEA could resume with the candidate filing process, which will end on June 11.