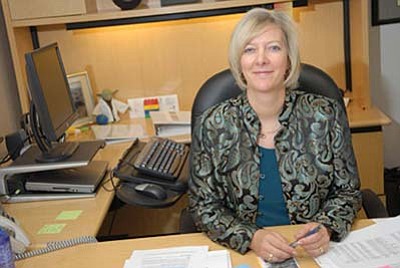 "I am certain that she did not accept this position expecting the kind of crisis Arizona has experienced.  Leah has made lemonade from lemons all the way around," he concluded.

Among Bornstein's many accomplishments as CCC president, two stand out as key examples of her leadership - the Strategic Plan and a Sustainable Financial Plan.

The Strategic Plan  addressed broad initiatives that have been a critical component in moving the college forward during difficult times including the following:  A review of organizational structures, strengthening the CCC Foundation, enhancement of student financial aid resources and availability, creation of a marketing plan, integration of CCC online students into the CCC community, establishment of strategic community partnerships to strengthen the college and perhaps most importantly during tough economic times the  initiation and execution of a Sustainable Financial Plan

The Sustainable Financial Plan involved many components with the end result being increased revenue and cost saving efficiencies. Through the plan, revenues were raised by strategically raising tuition and fees without negatively affecting enrollment. Cost saving measures included reorganizing and realigning departments in fiscal years 2009 through 2011, with a net savings the equivalent of 24 full-time positions accounting for a savings of nearly $1 million in salaries and benefits.

Other areas of the Sustainable Financial Plan included strategic partnerships like the CCC2NAU program with the cooperation of the President of Northern Arizona University, John Haeger that has had the effect of strengthening enrollment at CCC and benefiting students by assisting them with a seamless transition from CCC to NAU through tailored advisement and institutional collaboration. Another project initiated under Bornstein's leadership with Haeger's support, was the recent CCC/NAU Cline Library merger which will give CCC students access to greater library resources while saving the College from $75,000 to $100,000. NAU will also benefit from both partnerships by recruiting more and better prepared CCC students, thus increasing the number of baccalaureate degrees.

Bornstein commented, "While the past three years certainly has had its financial challenges, CCC is an institution full of promise and potential.  The faculty and staff are professionals committed to student access and success.  The strong support of the citizens of Coconino County has insured its growth and progress ...  It is with this support and involvement that it is my honor to continue to be part of such an impressive story.  CCC is something in which we should all be proud.