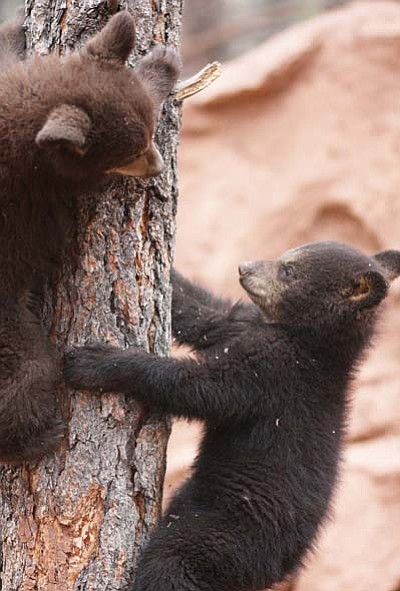 <i>Ryan Williams/NHO</i><br> Kona and Cocoa, twin 5-month-old cubs, cavort in the walk through portion of Bearizona.

WILLIAMS, Ariz. - Despite blustery conditions and chilly temperatures, Bearizona, a drive through wildlife park, opened its gates and greeted its first visitors May 22.

Before the first car drove through the entrance of the 158-acre attraction located near the Highway 64 and Interstate 40 junction, a ribbon cutting ceremony took place, attended by members of the Williams-Grand Canyon Chamber of Commerce and Williams Mayor John Moore.

"It went very well, beyond our expectations," Casey said. "I'd say we had five times the traffic I was expecting. I thought that if we opened to 30 paying cars a day I was going to be happy but we ended up with 100 each day."

Area residents were treated to free access to the park bringing the total number of cars to enter the park over the weekend to approximately 740.

Casey said he hopes to have an official grand opening towards the end of June. More animals and different species will arrive at the park over the summer. Casey went on to say expanding the more traditional zoo type walk through area will be the immediate priority as construction continues.

The walk through area will eventually house some of the park's smaller creatures including river otters, porcupines, red fox, arctic fox and wolves as well as grizzly bears and mountain lions.

"It will be about a mile and a half walk on a meandering trail, through the trees there," Casey said.

Kona and Cocoa, twin 5-month-old bear cubs, inhabit the only finished section of the walk through.

Plenty of construction is still evident in areas of the park outside the drive through portion.

Chief Operating Officer Vanessa Stoffell said the gift shop will operate out of a temporary trailer until a permanent structure is built sometime in the fall.

"You know, I think we're never really ready when we open so I try to keep that in mind," Stoffell said.

Bearizona moved from concept to construction in just short of one year. City officials reviewed the park concept during a departmental review team meeting July 17, 2009. Casey then presented Williams City Council members with the concept for the park during their regular meeting July 23, 2009.

Construction on roads in the park broke ground in October prior to last winter's snowfall.

Several Fred Harvey Company tour busses sit on the premises. Stoffel said they will eventually be used for group tours in the park.

"Those we're going to keep and make into biker busses," she said. "There's the Hog Rally and other private groups that want to go through together. We'll take the windows out and they can have a special ride that way."

Along with the busses, courtesy cars will be available for motorcycle riders.

"I think Bearizona is going to add a lot of visitation to Williams," he said. "I heard several merchants in town say they had people in their stores that had been to Bearizona last weekend. I think it will have a major impact on business in all of northern Arizona and particularly Williams."

Council members went on to approve an agreement with Bearizona officials during their regular meeting Jan. 14 giving Bearizona credit against impact fees for improvements the developers make that benefit the city of Williams. One such project is the re-alignment of Mountain Man Trail estimated to cost approximately $387,000.

Moore said getting the park up and running quickly was a group effort.

"I think the Casey family had their act together, so to speak," he said. "I think city crews worked hard to help them get the park off the ground. I think everybody involved with the city and the construction crews and the developers all worked together to make it happen."