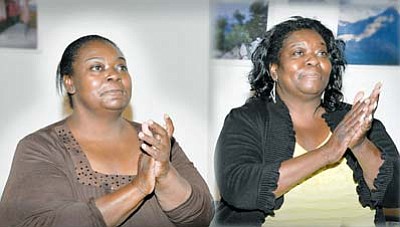 <i>Todd Roth/NHO</i><br> Sisters Brenda and Mary-Alice Hays entertained a relaxed crowd at the Seattle Grind in Winslow last Friday as part of the Winslow’s ongoing ‘Summer Nights’ series of performances by local groups. The sisters performed inside due to inclement weather.

WINSLOW, Ariz. - The free entertainment in Winslow last Friday night was the Hays Sisters singing their inspiring gospel style, in perfect pitch as usual. They were unable to bring their Four Styles Band due to a medical problem with the drummer, but their unaccompanied singing was inspiring just the same.

The regular venue on Kinsley Avenue was rained out but the performance was held at "The Seattle Grind" coffee shop at 106 E. Second St. The Grind has a large gallery area, which was perfect for Brenda and Mary-Alice Hays performance and for the audience to relax.

The Seattle Grind in Winslow will be the default location for any other Winslow Summer Nights which cannot be held outdoors due to inclement weather.