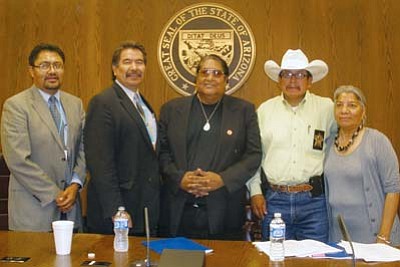 Hale called the meeting stating, "We need to inform those in our communities who will be subjected to the law and possible racial profiling about the requirements of the law and what to expect. We need to discuss solutions and to bring groups together for common positive dialogue."

Nowakowski stated, "This is not a racial issue, it is a human issue. It affects every citizen in the state of Arizona." Referencing the amount of time and funds that will be spent to respond to the requirements of SB 1070, Nowakowski said, "How are we going to enforce this law and go after the true criminals?"

Petra Falcon, Director of Promise Arizona, echoed the concerns calling SB 1070 an "unjust law" and remarking, "Here we are, 60 to 70 years later still struggling with issues of color," referencing when her parents moved to Arizona from Texas.

"This law will impact Native American people who are one of the most vulnerable groups in our society. They are made more vulnerable because of federal government inaction," Hale stated. "Immigration is not a new issue. By federal law, state laws do not apply on Indian Reservations and Native American people on Indian reservations, but once a Native American person comes off the reservation he or she is subjected to all state laws including SB 1070. Many of our elderly do not even have a state-issued ID," Hale continued. "As leaders we have a responsibility to inform our citizens."

Apache County Sheriff Joe Dedman, the first Navajo elected county sheriff, explained the training that law enforcement personnel is given in effort to prevent racial profiling. In most cases, probable cause must first be present as with any and all police actions concerning citizens.

Ben Chee, a member of the Tohono O'odham nation said, "The Tohono O'odham people are examples of people who did not cross the border, but the border crossed them. As a result, family and relatives find themselves on opposite sides of the border. This issue must be included in any discussion about immigration policies and laws."

Leonard Gorman, Executive Director, Navajo Nation Human Rights Commission, stated "The Commission is created to investigate incidents of discrimination involving Navajo Nation members. The Commission will do its part to educate Navajo People about SB 1070 and monitor the enforcement of law."

A number of Indian Nation governments and Indian organizations stated opposition to SB 1070 through resolutions. These include the Navajo Nation Council, individual tribes throughout Arizona, the National Congress of American Indians, the Inter Tribal Council of Arizona (representing 21 tribes) and the Native American State Legislators Caucus.