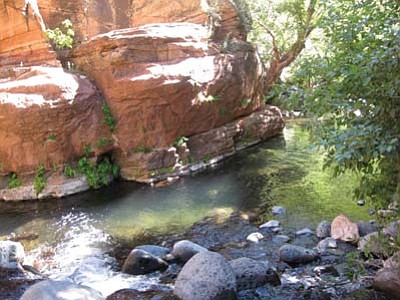 <i>Courtesy photo</i><br> Nice cool water runs down the creek to one of many swimming holes along Bell Trail.

BELL TRAIL, CAMP VERDE, Ariz. - Bell Trail is one of many trails in the Wet Beaver Creek system. Three words best describe Bell Trail No. 13 during the summer: Heat, water and lizards.

This 6.6 roundtrip hike can be hot during the summer with temperatures zooming to more than 100 degrees, but many consider it worth the suffering to get to the swimming holes where hikers can cool off for hours before making the trek back out.

Plenty of water is needed. Teenagers who use the swimming holes know that as some didn't have a backpack, but were carrying a gallon jug of water. Lizards were every five feet; butterflies and birds were also plentiful.

The trail is wide enough and easy, but there are large portions were there is no shade. There are a few ups and downs on this trail, but not much more than 200 feet in elevation gain. The trail starts at 3,880 feet.

The first two miles are covered with prickly pear, juniper and agave. The trail then climbs the north side of the canyon before descending down into the creek. Cottonwoods, alder, ash and sycamore trees line Wet Beaver Creek's cascading waters and swimming holes in the red rock canyon.

Hiking leader Keith Block loves this hike because of the water, but he admitted that the trail was hotter than he liked. There was only about 25 hikers on the trail on this weekday, but during weekends the swimming holes are packed.

Some of the larger swimming holes are blocked in between canyons.

On the way out, we also hiked the short Weir Trail which goes back down to the creek and helps add some mileage to the hike as we ended up with 8.3 miles.

We had also crossed the main creek known as Bell's Crossing and started going up another hill before deciding it was a bit too hot. Those looking for a much longer hike can climb the south rim of this canyon for another 1.5 miles and then it continues another 6.5 miles to Forest Service Road 214.