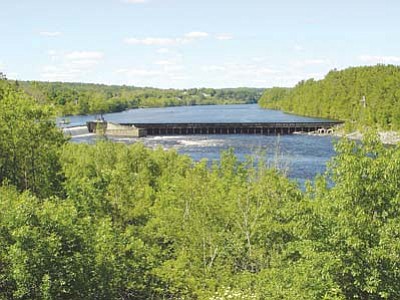 AUGUSTA, Maine - Author Edward Abbey and other environmentalists who hate dams will be proud of the Penobscot Tribe's project to tear down two dams and stop hydroelectricity at a third dam.

This project isn't just about the environment; it's about restoring a river so that the Penobscot Tribe in Maine can return to its way of life.

John Banks, director of natural resources and a member of the Penobscot Tribe, said the $60 million ten year project is well underway.

"The main goal is the revival of the tribal culture because the river is the heart of the tribe," he said. "The river is the basis of our survival. It was all our ancestors needed. Now we're in a position to reciprocate and give back to the watershed."

The Penobscot Tribe has always had fishing rights to the river, but due to the dams for many years there have been no fish. Banks said the river was also the "highway to gather for shelter, food, medicine and plants."

Penobscot elder Butch Phillips writes in an article, "A River Runs Through Us," on the tribe's website that the river is their lifeblood. He said for too many years that dioxin and mercury filled the river. The Clean Water Act has helped bring some of it back, but this would do much more for the river.

"Salmon, sturgeon and other fish are the symbol for our autonomy," Phillips wrote in the article.

The projects goal is to restore 11 species of sea-run fish which is why fishermen are main supporters of this project. Supporting agencies include Atlantic Salmon Federation, Natural Resources Council of Maine, Trout Unlimited, American Rivers, Nature Conservancy and Maine Audubon Society.

Eagles will also benefit from the dam removals. Cheryl Daigle has an article on the tribe's website emphasizing that eagles are the most revered animal to the tribe's culture. Eagle feathers, which are either found or obtained from the federal government, are used in ceremonies, clothing and caskets.

Banks said that eagles are indicator species for how any living being is doing. He added that improved fish runs help the eagles. Turtles, river otters, ospreys and herons will also benefit from tearing down the dams. It is expected to give the salmon and other fish 100 more miles in the main river and 1,000 more miles in the tributaries.

The funding for the Penobscot River Restoration comes from public and private agencies including $6 million from President Barack Obama's stimulus funds that will be used to remove the dams and monitor the impacts.

"Scientists are excited because they will be able to get data before and after the dams are removed to see its impact," he said.

Banks said the river is gorgeous and a mecca for wildlife, especially birds. He added that by bringing down the dams that the Penobscot River will be more connected to the ocean.

"We'll get more nutrients in from the ocean. That will mean more fish for the eagles and other birds," he said.

The state recently approved the permit to remove the first dam and the permits for the other dam removal is expected soon.

Discussions for removing the dams began in 1999 after PPL purchased eight hydroelectric dams and were open to the Penobscot Tribe's queries about buying the dams in order to tear them down.

The river restoration project has involved state, federal and tribal governments as well as a half dozen environmental groups. Dams are heavily regulated by the federal government because of their impact on fish and other wildlife impacted by its habitat.

"Our bottom line was the two main stem dams had to come out," Banks said.

Banks said the Penobscot River Restoration Trust was formed because for decades the river had been degraded by logging and paper mill companies.

By 2004, the Penobscot River Restoration came up with the $25 million needed to get the project off the ground. The $25 million pays for purchasing the three dams so two can be removed and one can be decommissioned. Another $35 million will be needed to tear down the Veazie and Great Works dams and decommission the Howland dam so that a fish run can get through it.

The National Oceanic and Atmosphere Administration came up with $10 million toward the initial $25 million in 2007. In June 2009, NOAA came up with $6.1 million more from Obama's stimulus fund so they could study the impact of the removal of the dams before, during and after.

The unique part of this is that no electricity will be lost because PPL (Electric) Co. will move the hydroelectric operations to other dams that won't impact the river. But by moving the electricity to other areas some cities or counties will lose taxes and other cities and counties will gain taxes from the operations.

Banks said the Penobscot River Restoration will continue to run one of the hydroelectric operations for a couple years in order to bring in funds to pay for future operations. He said the project should be completed within five years.

Banks said the lesson that other tribes and people can take from this project is that large conservation projects can happen when people take the time to work cooperatively.

Banks said it helped that the power company supported the project so it became a win-win situation.

He said one part of the project is getting increasing generation at other dams and then taking the turbines out of the current dams and putting them into other dams up river where the operation is not as critical to fish and other wildlife.

The project is not without economic benefits as opening up the river is expected to bring economic development to the tribe and the rest of the area in the form of tourism and recreation such as canoeing and bird watching.