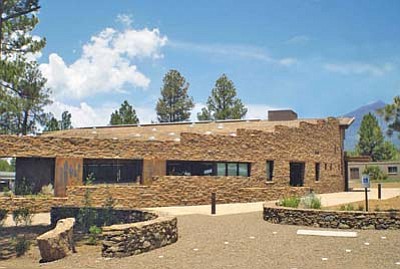 <i>Photo by Jim Roberts</i><br> Exterior of the Museum of Northern Arizona’s Easton Collection Center. According to MNA Director Robert Bruenig, the building was purposely constructed to have “an east-facing entrance to greet the sun every morning; a circular shape to invoke the cycles of life; and connections to the natural world with its living roof, appropriate use of day-lighting, local materials whenever possible, and views of the sacred San Francisco Peaks from both inside the building and out.”

FLAGSTAFF, Ariz. - When the Museum of Northern Arizona in Flagstaff began planning for its new collection center, it wanted to make sure to reach for the highest standards in which to house its fragile collections, while reducing the costs of running the new building.

"The museum's vision of setting the bar for museum collections care, (including temperature and humidity, light levels, fire suppression, security, and infestation controls), added to its obligation to the surrounding region's Native people and natural environment of the Colorado Plateau, set MNA on its path to exceeding the U.S. Green Building Council's Platinum Leadership in Energy and Environmental Design (LEED®) Certification requirements," Bruenig added.

"We didn't start out thinking about just getting points towards Platinum Certification. We wanted to build the best building we could, and near the end of the design process, we realized that the building would be close to achieving it."

"The Easton Collection Center's Platinum LEED Certification demonstrates tremendous green building leadership," said Rick Fedrizzi, President, CEO and Founding Chair of the U.S. Green Building Council. "The urgency of USGBC's mission has challenged the industry to move faster and reach further than ever before and the Easton Collection Center serves as a prime example of just how much we can accomplish."

The Washington, D.C.-based U.S. Green Building Council is committed to a prosperous and sustainable future for our nation through cost-efficient and energy-saving green buildings. Greater building efficiency can meet 85 percent of future U.S. demand for energy, and a national commitment to green building has the potential to generate 2.5 million American jobs.

"This new building is a symbol of the museum's highest aspirations," states Jim Roberts, principal architect from Roberts|Jones Associates in Phoenix. "Our design team sought sustainability, functionality, and historical relevance, and our rewards came in discovering solutions that were both surprising and delightful."

Architect Jim Roberts, MNA Director Robert Breunig, and President/CEO Tim Kinney of Kinney Construction Services worked closely to achieve the highest sustainability standards required for the Platinum LEED Certification. Kinney remembered, "Principles of sustainability were incorporated into the planning from the beginning, with a LEED Certification always in our minds."

The LEED Platinum Certification is the second major recognition for the Easton Collection Center. In November 2009, McGraw-Hill's Engineering News Record in New York announced its second annual Best of the Best Award, a national competition that recognizes design and construction excellence. The Easton Collection Center received the top national award in the Green Building Category, making it the Greenest Building in 2009.

This month in Phoenix, the Easton Collection Center was named one of three finalists and took the top award in the Commercial Green Building category for the First Annual Build It Green (BIG) Awards. The awards were presented by the U.S. Green Building Council Arizona Chapter (USGBC), the Southwest Build-It-Green Expo, and the Arizona Department of Real Estate (AZRE), and sponsored by Adolfson and Peterson Construction and SRP, one of Arizona's largest utilities.

The museum's staff is already hard at work moving its most fragile collections, with 35,000 objects already in their new cases. Thousands more objects will be moved into the new building over the course of the next two years. Packing, moving, and re-housing the objects in the new building is a major logistical challenge, requiring that every object moves to a known location in good condition. New mounts and supports will be fabricated and conservation treatments applied, where needed.

The Easton Collection Center sits at the base of the San Francisco Peaks, across Highway 180 from the Museum's Exhibit Building. It has a living roof of native grasses and wildflowers that creates greater insulation, deters runoff, reduces erosion, and creates habitat for birds and insects.

MNA plans to offer weekend public tours of the Easton Collection Center building beginning at the end of July. Public tours for the remainder of 2010 will be given on Aug. 21, Sept. 25 and 26 in association with the Festival of Science, Oct. 2, and Nov. 27. The tours will all be at 2 p.m., with the exception of November's tour, which will be at 3 p.m.

Public tour reservations can be made by calling the museum's front desk. Regular museum admission will be collected at the front desk on the day of the tour.

Behind-the-scenes tours will give museum members an up-close look at the Easton Collection Center and the treasures stored within. Member tour reservations can be made by calling the Membership Office at ext. 219. Additionally, MNA's monthly Collections Tours are continuing. For more information, go to www.musnaz.org/research/colltours.shtml.

Founded in 1928, two of the core tenets of the mission of the Museum of Northern Arizona are: Collections - to collect and preserve objects of arts and scientific interest with great care and respect, providing a continuing source of inspiration and learning; and Conservation - to preserve and protect the region's historic and prehistoric sites, works of art, scenic places, plants, and wildlife from needless destruction. The completion of the Easton Collection Center brings MNA significantly closer to completing one of its major institutional goals of protecting and enhancing its collections.

Go to www.musnaz.org/collcenter.shtml for more about the Easton Collection Center.