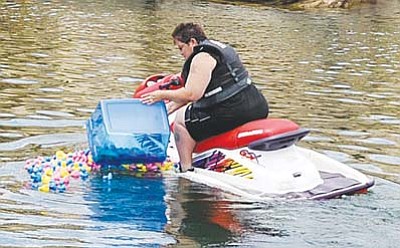 WINSLOW, Ariz. - On Saturday July 17, a number of "ducks" were positioned for the second annual Winslow Duck Race held at Clear Creek at McHood Park. The plastic ducks were about three inches long, colored pink, yellow and blue. Each duck was numbered and the cost to buy a "duck" was $5. The "race" was put on by Winslow Soroptimists and Winslow Rotary.

The ducks were started by Michelle Aragon who took the box of 400 ducks to the middle of Clear Creek on her jet ski. After releasing the ducks, Aragon and her husband "encouraged" the ducks to speed to the finish line by creating waves behind them with the jet ski. The finish line was marked by yellow caution tape about 30 yards downriver.

It was a tight race and nervous duck owners were urging their ducks to speed up.

The ducks, however, paid no attention to the crowd and pushed on, oblivious to the screaming. The finish line was crowded and tense. Eventually, "duck" No. 313 owned by Tom Humphrey (DPS) was victorious.

Prizes were awarded to first, second and third place finishers. Swimming volunteers captured the winning ducks and also corralled all the exhausted finishers and put them away for next year's race.