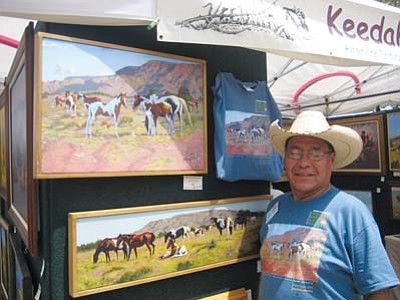 Edaakie won first place in the jewelry division while Black Eagle won the top prize in the traditional category.

Edaakie said he was happy to win first place in the jewelry division as he worked together with his wife Patty to create the corn maiden necklace created out of coral, turquoise, black jet and mother of pearl. He said they worked together for five days to create this piece. He learned the craft from his parents Rita and the late Anthony Edaakie.

Edaakie and his wife will create more jewelry for more art shows.

Born and raised in Zuni Pueblo, the Edaakie's attend many religious activities and miss several art shows because of that.

Black Eagle, who took first place in the traditional category for his warrior set, said he was honored to take first place.

"I'm excited because it's a big honor because of the high caliber of artists here," he said.

The hair comes from family or tribal members. The inspiration for his work comes from his parents and grandmother

"You search your heart and you come up with answers," he said.

Black Eagle also creates breastplates, weapons such as knives and tomahawks, rattles, teepee knockers, masks and shields. His creations have been used in movies including a contemporary spirit warrior mask in the yet to be released movie Blood Line.

Many of his creations come from dreams as he draws from personal experiences, research, his family and ancestors. His concepts revolve around the importance of living with nature.

He resides in Mountain Ranch, Calif., near the western slopes of the Sierras, but he was born in Elko, Nev., and lived his first two years on the Te-Moak Reservation in Lee Moak, Nev. He spent the next 18 years on the Tule River Reservation in central California. The deep forests of the Sierra Nevada provide him with solitude and opportunities to learn about himself and his place in nature.

Gerry Quotskuyva was one of several Hopis showing their work. Quotskuyva is mainly a kachina carver, but he also creates bronze sculptures, paintings and Giclee prints.

He uses many symbols to represent clouds and rain. His unique style has been recognized nationally on a public television series titled "Living in Balance on Shatki-Hill." His art has also been featured in the book "Art of the Hopi."

Quotskuyva's work has been shown, featured and awarded at various museums and galleries throughout the country. He is currently working on a permanent collection for Xavier University in Cincinnati.

He creates sculpture style kachina dolls. The full figure style depicts the kachina dancers as they look during the ceremonies. He also uses uplifting motions in these kachinas to represent the process of becoming a cloud.

Randy Keedah, who was the featured artist, was one of several Navajos prominently displaying their work. Keedah was chosen as this year's featured artist after taking first place last year in the two-dimensional art category. He specializes in Western, American Indian and Southwestern fine art.

His story touches people as he was born in Steamboat, but his father left his mother before his birth and his mother abandoned him when he was two weeks old. His grandmother found him and his grandparents raised him. He grew up on a sheep ranch which gave him a love of mother earth, the American Indian people and western life.

Like many at that time, Keedah was sent off to boarding school in Utah. By the age of 14, he was drawing three-dimensional art. As a freshman, his teacher let him sit in the back drawing horses and other special projects while the other students learned the basics. He won Outstanding Art Student of the Year as a freshman.

While in high school, Keedah found a book by Charles Russell and "fell in love with his art." Later, he discovered Bill Owen's work on the cover of Western Horseman magazine. So, he became enamored with western cowboy art.

Keedah went through a bout with alcoholism and was homeless for a time. But through his belief in the Lord and with the support of his second wife, Colleen and other people, he has been sober for 21 years and returned to his art.

Keedah loves painting horses, but he also paints Navajo girls. His goal is to make colors, land and people come alive in his paintings. He paints only peaceful and happy scenes.

Cherokee artist Jesse Hummingbird is one of the mainstays each year at PIAM. He tantalizes art lovers with his colorful paintings that mix the modern and traditional.

For example, his painting "Let the Night Begin" shows the stomp dance which is used for prayers. The background has birds and stars. A lot of his art shows the night including the reoccurring moon.

Hummingbird mixes his traditional Cherokee art with many other art forms including the Jewish painter Chegal. He mainly paints acrylics and etches. Hummingbird has won major awards every year since 1984. In 1992, he won the Gallup Intertribal poster award.

Hummingbird is self-taught, but continues to learn from friends.

Born in Oklahoma, he was raised in Tennessee and South Carolina. He and his wife Sandy have two dogs.