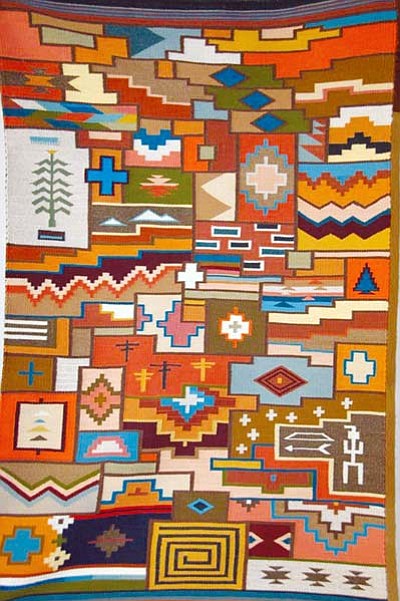 FLAGSTAFF, Ariz. - In Navajoland, the old and the new - the traditional and the contemporary - exist side by side amidst the wide expanses of earth and sky so dear to all Diné. This year's 61st Annual Navajo Festival of Arts and Culture at the Museum of Northern Arizona presents artists, music, dances, and Heritage Insight programs.

Ancient arts and more modern forms of expression such as documentary films will create new understandings about this great people. This year's festival will be Aug. 7-8 from 9 a.m. to 5 p.m. both days.

Over 75 Navajo artists will gather; weavers, jewelers, painters, potters, and basket makers who continue the tradition of bringing their artwork to market and sharing what makes their artwork distinctive.

Two days of programming will highlight top musical names from the region, a traditional dance group, and revealing talks by area experts to give visitors an inside look into the largest tribe in the Southwest.

Heritage Program Manager Anne Doyle shared, "I hope this year's visitors will learn other ways of looking at the world. This year we'll illuminate and celebrate the Navajo experience through many cultural interpreters and art forms."

Museum Director Robert Breunig added, "This year, a Memorial Award to honor weaver Alice Nez Herder (1907-2009) will be given to a weaver whose work best exemplifies Herder's weaving. She continued to card and dye wool, and weave, to well over 100. She'll always be remembered as the matriarch of the Herder Family Weavers of Hardrock, Arizona." The Herder Family will be at the festival demonstrating their weaving techniques.

Two documentary films will be shown at the festival.

"Hearing Radmilla" tells the story of singer Radmilla Cody, who was crowned the first bi-racial Miss Navajo Nation. Her musical career was going strong until she hit major detours in an abusive relationship and time in prison, where she grew stronger spiritually.

Today, Cody is a motivational speaker and a recording artist who will explore topics in the film such as race, personal empowerment, and domestic violence.

Director Angela Webb will speak about making this film.

Student short "In the Footsteps of Yellow Woman" by 14-year-old Camille Manybeads Tso is a 26-minute docu-drama based on her family's strong oral tradition about her warrior great-great-great-grandmother, a pregnant teenage mother who endured the grueling Navajo Long Walk forced relocation of 1864-68.

The film documents her capture by the U.S. Cavalry from her home near Black Mesa, and how she survived the three-month walk to Fort Sumner on the New Mexico-Texas border, living in a harsh interment camp for a year and a half, and the walk back to Arizona with her child.

This film has been shown at many film festivals and has received numerous awards.

As the first-ever Navajo to earn a Ph.D. in history, Dr. Jennifer Nez Denetdale is a strong advocate for helping Diné people construct a history that is entirely theirs.

Denetdale is an associate professor of history at Northern Arizona University and teaches courses on Native American and Navajo history, Native American women, women in the U.S. West, and Indigenous feminism. She has research interests in colonialism, nationalism and gender, and environmental and social justice.

Her book, "Reclaiming Diné History: The Legacies of Navajo Chief Manuelito and Juanita" was published by the University of Arizona Press in 2007 and her book for young adults, "The Long Walk: The Forced Exile of the Navajo" was published by Chelsea House in 2008.

Her current research project is a history of Navajo women. Denetdale will read from her writings and sign books for festival visitors.

Theresa Boone-Schuler, a Diné educator from Flagstaff, will lead the very popular ethnobotany walks along the museum's Rio de Flag Nature Trail. Schuler gained her knowledge from her father, a noted herbalist who urged her to pass on the knowledge of traditional healing plants by teaching about identification and usage. Group hikes will be three times each day at 10 a.m., 12 p.m., and 2 p.m.

Navajo linguist and educator Larry King shares humorous examples and fun stories of how new words and ideas are introduced into the Diné language. He will introduce the Navajo phonetic alphabet to familiarize festival visitors with basic concepts and sounds from his language.

Matt Tafoya will talk about nineteenth-century Navajo male material culture, illustrating the old and new ways of Navajo male attire and its influences throughout history. Also, at his booth he will demonstrate the creation of arrows, arrowheads, moccasins, and clothing.

Award-winning painter Redwing Nez from Indian Wells on the Navajo Reservation will talk about his recent experience creating a mural in downtown Flagstaff and about the stories it tells. Nez was chosen to paint the new Centennial Walk Mural at the Flagstaff Visitor Center, which depicts 100 years of Flagstaff's history.

Under the Big Tent

Blackfire's high energy alternative/punk/Native rock music and socio-political messages reflect the hopes, freedoms, and barriers of today's world. They tackle topics such as government oppression, relocation of Indigenous people, eco-cide, genocide, domestic violence, and human rights. Blackfire was awarded the Native American Music Awards' Record of the Year and Native Heart Awards in 2008. They also have previously received the Group of the Year Award for their Woodie Guthrie Singles recording and the Best Pop/Rock Album Award for their One Nation Under release. Blackfire tours extensively throughout the world, having already completed 13 tours to Europe and shows in the Sahara Desert, Mexico, and Canada.

The Pollen Trail Dancers will perform colorful social and storytelling dances meant to be danced in the warm season. Emcee Brent Chase accompanies his dance troupe with humor and Navajo flute playing. The Dance of the Holy People comes from Navajo Blessing Way beliefs, the Corn Grinding Dance is connected to the coming of age of a young woman and reinforces the relationship between Navajo people and corn, the Sash Belt or Weaving Dance tell the story of Spider Woman's influence in weaving, the Basket Dance depicts the important role of baskets in Navajo life, and the Bow and Arrow Dance honors the warriors of old who have protected the Diné way of life.

Canyon Records recording artist Aaron White will perform his powerful, original songs with acoustic guitar and Native flute. His finger picking style and passion for songwriting has made him a Native American Music Award winner in 2004 and a Grammy-nominated artist is 2003 for Best Native American Album. White will also talk about the history of the Navajo flute.

Radmilla Cody will serve as emcee in the Heritage Insights tent. She was winner of the Best Female Artist at the 2002 Native American Music Awards and is a Canyon records recording artist who will sing traditional Navajo songs and her own lyrics with her stunning voice and range.

Clarence Clearwater sings traditional songs in Navajo and his own contemporary songs in English about his spirituality and the oppression of Native people. His big, enchanting voice and stirring acoustic guitar are most often heard on the Grand Canyon Railway, entertaining passengers between Williams and the Grand Canyon.

"Goat in the Rug" puppet show by the MNA docents will be performed both days at 10:45 a.m. and 1:15 p.m. All day at Creative Corner, kids of all ages will enjoy weaving bookmarks, coloring Navajo rug patterns, and making bolos.

About the Navajo Nation

The Navajo Nation has the largest reservation in the U.S., covering nearly 27,000 square miles in Arizona, New Mexico, and Utah. The population of the Navajo Nation has surpassed 250,000. As a sovereign nation, it is focused on health card, education, economic development, and employment to benefit its people. Thousands of people each year visit the natural wonders at Monument Valley, Canyon de Chelly, and Chaco Canyon on the Navajo Reservation.

Now celebrating its 82nd year, the Museum of Northern Arizona is one of the great regional museums of our world, evoking the very spirit of the Colorado Plateau. MNA's nine exhibit galleries present Native cultures, tribal lifeways, natural sciences, and fine arts. The Museum is located three miles north of historic downtown Flagstaff on Highway 180, on the way to the Grand Canyon. Festival admission is $7 adults, $6 seniors (65+), $5 students, $4 Native people, $4 children (7-17), and free to Museum members.