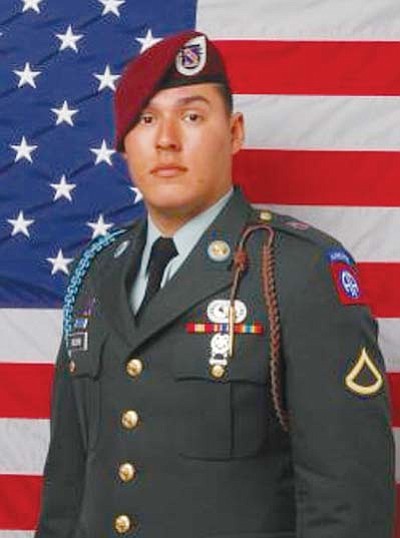 WINDOW ROCK, Ariz. - On Friday, the Navajo Nation announced the loss of another soldier in Operation Enduring Freedom in Afghanistan.

Spc. Christopher Moon of Tucson died July 13 at Landstuhl Regional Medical Center in Germany after sustaining wounds on July 6 in Afghanistan. He is the 12th Navajo serviceman lost in the War on Terror in Afghanistan or Iraq.

"All of the Navajo Nation is saddened and deeply grieved to learn of the death of another of our young soldiers in Operation Enduring Freedom," President Joe Shirley Jr. said. "Christopher gave his life protecting us all and defending freedom, doing what he strongly believed in, and living a life of honor. Our hearts and our deepest condolences go out to his family and the communities of Tucson where called home and he was loved and of Gray Mountain where his grandparents live."

"Spc. Moon was the type of person we have all heard of but have very seldom ever met," said 1st Sgt. Derek Gondek of Spc. Moon's company. "He was one of those men who no matter what he put his mind to he became a star at it, whether it was on the baseball field or on the battlefield. He will truly be missed by his fellow warfighters."

Spc. Moon joined the Army on Feb. 5, 2008, and attended One Station Unit Training and Airborne School at Fort Benning, Ga. After completing training, he was assigned to Fort Bragg, N.C., where he arrived Aug. 12, 2008, and joined 2nd Battalion, 508th PIR. He deployed with the unit to Afghanistan in September 2009, according to a 82nd Airbone Division statement.

He is survived by his parents Brian and Marsha Moon of Tucson, his grandparents Loretta and Harry Begay of Gray Mountain, his aunts Charlene "Chucki" Begay of Aztec, N.M., and Alberta Begay of Tucson, his uncles Wesley Begay and Harrison Begay of Phoenix, Kenneth Begay of Cameron, and many nephews and nieces.