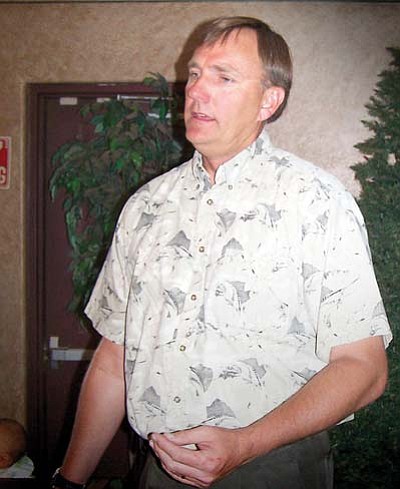 Orville Wiseman, co-owner and operator of Wiseman Aviation, spoke at the Winslow Rotary Club June 30. He talked about his background as a flight instructor and then a corporate pilot. In 1999 he opened a full service fixed base operation (FBO) at the Flagstaff Airport. Four years ago he was selected to operate Winslow's FBO, which includes fuel sales, aircraft maintenance, charter flights and flight instruction. He has also remodeled the historical terminal and upgraded the facilities to accommodate modern air travel complete with refurbished patio and lobby areas. He has four full-time employees and is able to support the "fire bombers" that land, fuel, reload and take off from Winslow-Lindbergh Airport. Wiseman also rebuilt and restored the Winslow Terminal similar to when it was dedicated by Charles Lindberg.