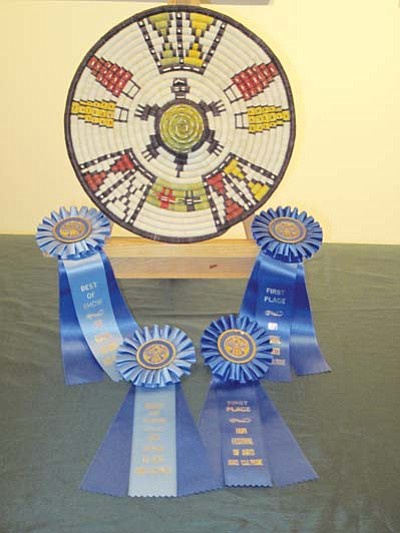 FLAGSTAFF, Ariz. - The balmy weather, art crowd and holiday excitement over the July 4 weekend only served to heighten the festive atmosphere at the 77th Annual Hopi Festival at Museum of Northern Arizona.

Ticket sales showed that there was a 12 percent increase in visitors to the Hopi Show this year, but you could tell that just by the shoulder-to-shoulder crowd at the Friday night reception.

For the price of admission, there was so much to take in, learn from and experience that it was almost impossible to choose which activity to go to first. This year, over 75 Hopi artists, demonstrators, performers, music and dance groups and cultural speakers were able to share their art form and cultural heritage with visitors.

Director Dr. Robert Bruenig commented, "The Hopi Festival of Arts and Culture represents a 77 year partnership between the Hopi people and the Museum of Northern Arizona. What I am proudest of is that this event is not about just the buying and selling of art, but the communication to the non-Hopi world about Hopi values, language, and the concepts behind the art. What this show does is show the world the artistic and philosophical genius of the Hopi people. It is one of the most important annual public events in northern Arizona, drawing people from all over the region to share in the beauty of Hopi cultural expression."

This year's Hopi Festival was dedicated to artist, poet and philosopher, Michael "Lomawywesa" Kabotie who died last October 2009. Kabotie is also the subject of a special exhibit on display at MNA titled, "Walking in Harmony."

Ed Kabotie who is an acoustic guitarist and Native flute player gave a special presentation titled "Journey of a Sacred Clown," a special tribute to his late father.

The younger Kabotie was also the recent winning recipient of the "Voters Choice Award" through Hopi radio station KUYI based on the Hopi reservation receiving that award through on-line popular voting.

Also featured on Sunday afternoon was teen actor and WenSaks model, Kiowa Gordon, of Caucasian and Hualapai tribal descent. Gordon, born in Peach Springs but raised in Cave Creek is currently featured in the latest movie hit "Eclipse" of the Twighlight book series. Gordon signed autographs and spoke with his fans. Sakiestewa's new line will feature Gordon in his ads.

The Best of Show award was given to Velma Wadsworth for her "poota" basket titled "Turtle with Corn and Rainclouds." Wadsworth is considered a master basket maker from the village of Shungopavy and her entry this year was a testament to her skill and command of her art form.

Several of most prestigious art awards this year, were given to Hopi women, including the Director's Award to Wilmetta Kayquoptewa for her "ceremonial Cape Plaque." Kayquoptewa is also considered a master basket weaver from the Village of Hotevilla.

Kayquoptewa has lived on the Hopi mesas her whole life and learned her art form from the women in her family from start to finish.

The MNA Memorial Award in memory of Michael Kabotie was awarded to Lance Dawavendewa for a self-portrait.

First Place awards were presented to Donnieva Lomatska for her Turtle and Maiden Blanket plaque and Janice Pavenyouma for her Hopi sifter basket.

Cultural Arts First Place was awarded to Alicia Monrov for her coiled Kachina.

Jewelry First Place award was taken home by Ramon Dalangyawma for his bracelet with hand motif.

Alice Dashee was awarded First Place in the Pottery category for her vase with bird design.

Textiles in traditional weaving First Place went to Lloyd Harvey and Textiles/Other was won by Bonnie Chapella Nampeyo for her submittal of "Windows from the Past" Quilt.

Sculpture category First Place was won by Tim Cordero with his piece tiled, "Beginning of Time."