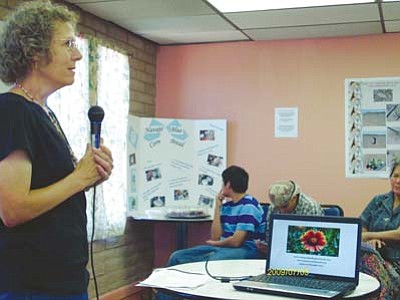 Participants were briefed on Farm to School Opportunities for Producers and Communities and led through the process developed by Jim Dyer of Southwest Marketing Network for the Hesperus, Colo. school system.

Sister Maureen, Executive Director of St. Jude Good Bank, shared her experience with the community garden at St. Jude's and the Tuba City Farmer's Market hosted every Wednesday from 5:30-7:30 p.m.

Ron Brewster with Green Sky Farms wrapped up discussions with an informative overview of the hydroponic greenhouse project being planned for the Red Gap Ranch. At full capacity, Green Sky Farms is designed to produce in excess of 250,000 plants annually out of 30 greenhouses. The project also includes a Native American garden, and medicinal herb garden, orchards and eventually a meat processing plant. The plan is to provide "affordable and nutritious" foods to all of northern Arizona including lettuce, tomatoes, spinach, cucumber, peppers, broccoli, strawberries and other berry crops and to educate and employ a number of local residents.

Wednesday's activities were kicked off with a traditional Navajo sheep butchering and banquet followed by a meeting of the Food Policy Council and discussions on gathering information and support to assess the existing food and agricultural related enterprises on Western Navajo lands.

The event was organized by Israel Calsoyas and emceed by Jamescita Peshlakai, Grant Coordinator for Diné Inc.